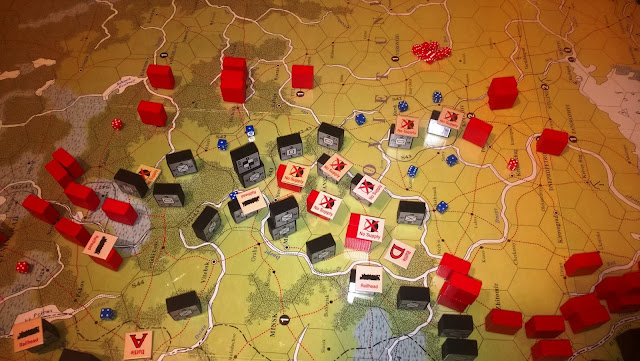 Al and I have been biting into EastFront II  "Columbia Games" excellent block wargame. We played the Barbarossa scenario and will continue with Operation Typhoon in the near future. I have been playing the Germans and Al the Reds. Both of us have made many mistakes, Al leaving his HQ's exposed while I have over extended and ran out of supply, but both of us have thoroughly enjoyed the experience with supply and rail lines the key to success in this game.

The above photograph shows the situation in September 1941. The German "Army Group Centre" has broken through the Russian lines isolating Russian "Western Military District" armies in what was to become known as the "Gomel Pocket". In attempting to break through and release these trapped troops further Russian units were to become isolated and trapped them selves. However the exhausted Germans having been going full throttle since July have over extended their supply lines and with the on set of winter made limited progress in the next couple of months. The exception a trust for Moscow which resulted in heavy casualties for the German "7th Corp", the decimated units been removed from the city and sent back to German to be rebuilt so heavy were their losses in the vicious house to house fighting. 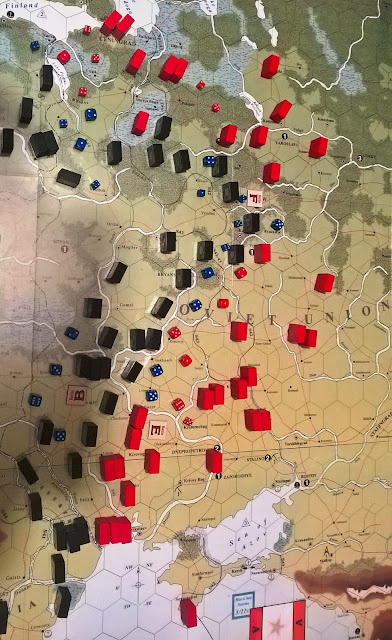 
The photograph above shows the situation at the start of December 1941. Hexes with blue dice show German friendly control and red dice those friendly to the Russians. The large letters signify ongoing battles with "F" the battle for Moscow. With Russian command and control having been severely hampered as a result of eliminated HQ's and with the Germans unprepared for the sudden onset of the harsh Russian winter the next few months may see both sides trying to regroup and refit in preparation for the spring thaw.

This classic rewards repeated play and we both have committed to a regular hookup. A wonderful game both challenging and unforgiving. Can't wait for the next session.
Posted by decb at 10/22/2017