Greetings fellow grognards, just a quick post to plug Gaelcon 2021. Along with other Irish gamer's I shall be teaching a war game via vassal and discord to interested Gaelcon attendees on Sunday 24th October from 3pm.  The game I have offered to teach is "A Victory Lost".

From Board Game Geek- "A Victory Lost: Crisis in Ukraine, is a simulation of the intense mobile fighting between the Axis and Soviet forces in the southwestern USSR, from the completion of the Soviet encirclement in December 1942 to German Field Marshall von Manstein's famous "Backhand Blow" counterattack. The Soviet forces aims to trap and eliminate the Axis forces that are in full retreat from the Caucasus, while the Axis forces must successfully withdraw and attempt to restore the front line by launching a desperate counterattack. The slightest mistake might turn victory into a rout."

Details of the wargame event are below. Go on, release your inner wargamer, you know you want to.

Advanced Squad Leader, Commands and Colors, you have heard the names but can you play the games?

These sessions are devised for novices and experts to learn the tools for online play, to meet other players and to learn new game systems with experienced game facilitators. Come to the glorious board wargames discord channel for tutorials, pickup games and matchmaking.

Tutorial: How to Play Online Board Wargames with Vassal

In these sessions, we will take you through installing and using the free Vassal online tabletop for wargames (https://vassalengine.org/) with a focus on how to use popular modules like Advanced Squad Leader, Combat Commander, Commands and Colors, Standard Combat Series and World at War 85.

Suitable for new players or experienced players who want to learn about online play.
Note; Vassal is a java program that runs on Windows or Mac but it does not support tablet, Chromebook or phone play so you will need a PC to participate.

Board Wargames Sessions on Saturday and Sunday afternoon, 2-4pm

Join this session for wargames tutorials and matchmaking for online play. For this session, we have assembled a team of experienced players to introduce you (or you and an opponent) to some of the most popular wargames systems, for example, ASL, Combat Commander, A Victory Lost, The Russian Campaign,  Men of Iron, Commands and Colors, the Standard Combat Series and World at War 85.

We will also provide a matchmaking service for experienced players who wish to play one of these games so please turn up at this time to start to play. Players who have licenses for Tabletop Simulator and prefer that can of course also use that to play wargames in this session. 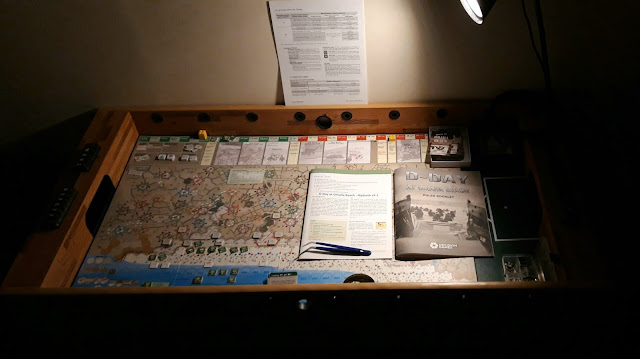 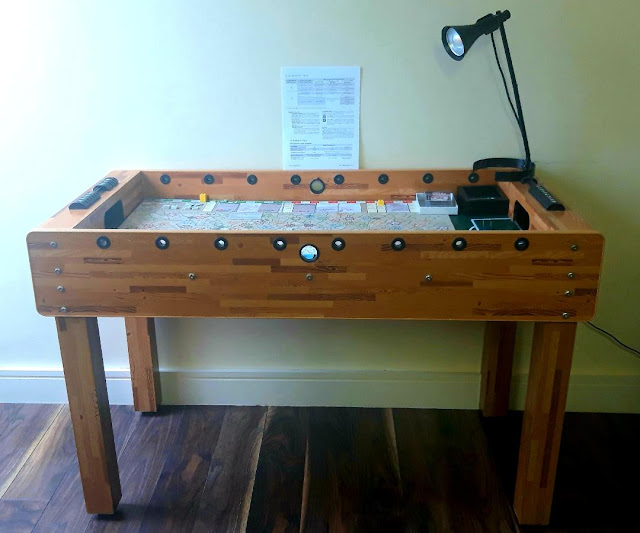 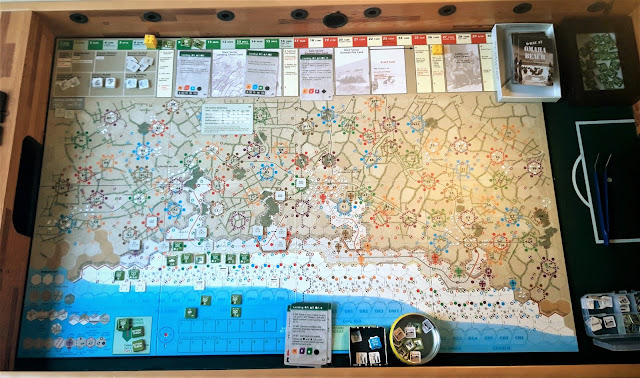 A DIY game table created from an old football table, recycling or what. I plan to line the base with a  yoga mat secretly raided from the wifes collection. In the pictures above you will see that "D Day at Omaha Beach" fits perfectly. I had a quick look on ebay and you can acquire a table like this for £20/£30. The internal playing space is 60cm wide by 100cm, larger tables are available.
Posted by decb at 12/01/2020 No comments: 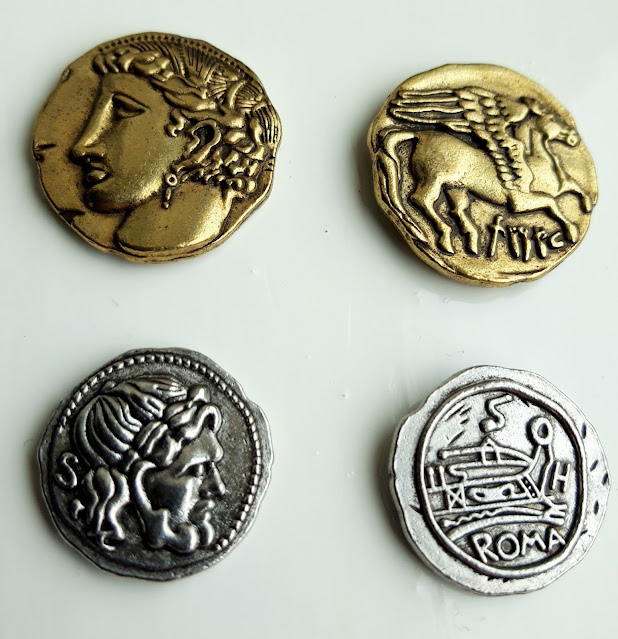 Show me da money.
Who doesn't like to pimp their games. The photo above shows some Roman and Carthaginian coins  which were available as an extra stretch goal during the "Hands in the Sea" kickstarter. They shall be used as victory banners for "Commands and Colors Ancients" games.
Posted by decb at 11/30/2020 No comments:

Email ThisBlogThis!Share to TwitterShare to FacebookShare to Pinterest
Labels: Board game, Pimp

As the early morning fog clears, Alexoff tightens the collar on his fur lined Marshal's coat, he notices the harsh and bitter winter wind beginning to pick up and the sound of the churning of the 1st Soviet Guard Armies tank engines. Suddenly, a flurry of flashes and thundering explosions signal the start of  "Operation Saturn". It has begun, Marshal Alexoff smiles "now it is the fascists turn to pay the reapers bill."

Meanwhile, outside Tatsinskaia in Tzars Nicholas former summer palace General Field Marshal Von Breen's command staff begin to grow worried as desperate reports from the front reach them. East of  Boguchar a 150 mile wide breach has been blown in the front line. Forward positions which have borne the brunt of the Reds offensive have evaporated under the onslaught. Von Breen and his aids are bent over the situation maps, they quickly identify that Ivan has chosen well, hitting Italian and Hungarian formation. Von Breen realises desperate measures are needed, "Contact Kleist's HQ immediately and advise them of the situation, they will need time to organise the 1st Panzer Armies withdrawal, no time can be wasted if they are not to be trapped like Paulus". 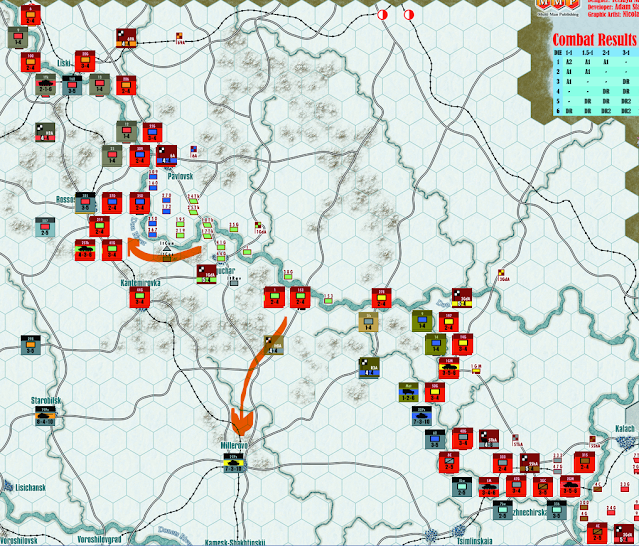 So begins my some what melodramatic post with Al (Marshal Alexoff) and my (Field Marshal Von Breen) return, via vassal to the wonderful "A Victory Lost" and its chit pulling goodness. I have played a number of other hex and counter chit pullers recently including "A Victory Denied" younger sibling of AVL and Revolution Games "Konigsberg," but none of them match the streamlined and elegant nature of this classic. With its low learning curve and its random chit draw mechanism, this game is ready made for repeated plays and revisits following long periods of absence.

Enough idle chitter chatter, time to form the Kampfgruppen and try to stabilise the front, der Fuhrer will not be pleased.

Email ThisBlogThis!Share to TwitterShare to FacebookShare to Pinterest
Labels: A Victory Lost

I acquired " Labyrinth: War on Terror, 2001 .... " recently in a trade. It has already been set up and now the reading of rules and watching of how to play videos must begin.

Labyrinth is a "Twilight Struggle" influenced design and has been said to be an early evolution of the Coin system, no surprise given  that the designer " Volko Ruhnke " is the creator of both. You play as either the Jihadist or the United States in a dual for world ideological domination. The game has a solo play option with the Jihadist the opponents of the live player. This is where I shall start before introducing the game to one of my fellow grognards. So as Rumsfeld famously said

Know what I mean.

Email ThisBlogThis!Share to TwitterShare to FacebookShare to Pinterest
Labels: labyrinth

ONITAMA, THERE CAN BE ONLY ONE TRUE KING. 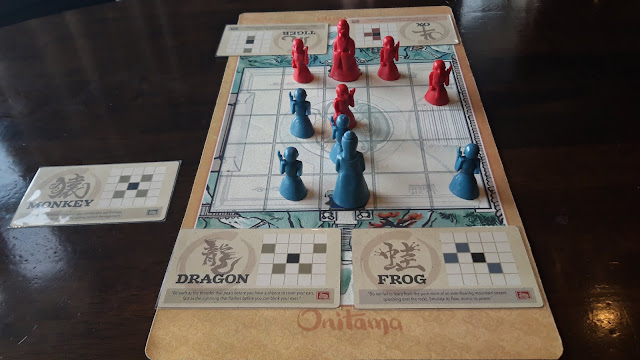 
I am on holidays in Sligo at the minute and broke out Onitama in the hotel foyer. Managed to beat my son twice to maintain my house champion title. Can't let these young whipper snappers overthrow the rightful king.
Posted by decb at 2/17/2020 No comments:

WHAT WARGAME DID YOU GET THIS MONTH, FEBRUARY 2020.

Email ThisBlogThis!Share to TwitterShare to FacebookShare to Pinterest
Labels: D Day at Omaha Beach, The Die is Broadcast, What wargame did you get this month

Email ThisBlogThis!Share to TwitterShare to FacebookShare to Pinterest
Labels: Hearts and Minds, The Die is Broadcast, Whats on the table

A GAMING DAY OUT.

Email ThisBlogThis!Share to TwitterShare to FacebookShare to Pinterest
Labels: The Die is Broadcast

Join me for a little bit of babbling, as I list what's been on my gaming table this December. 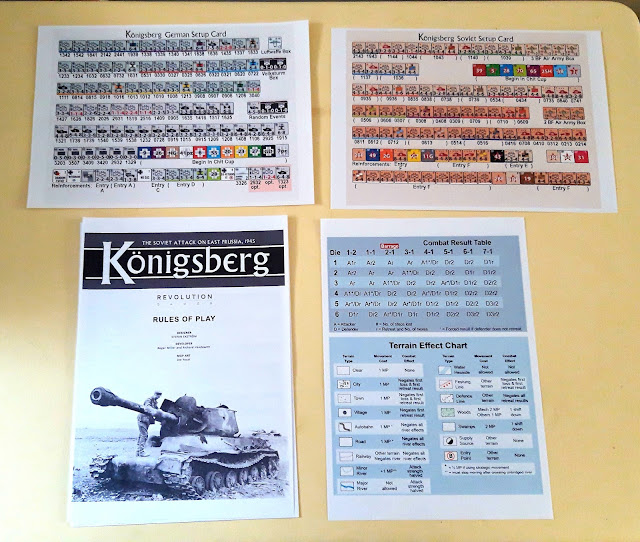 I spent yesterday prepping for this weekends game of "Konigsberg" by Revolution games. We (Al and Arthur) are going to play a three player game with one person taking the Germans Army group centre and the other two playing the Russian 2nd and 3rd Belorussian Fronts.

The game depicts the East Prussian Offensive planned by the Soviet Stavka in early January 45 to prevent flank attacks on the Russian armies heading towards Berlin. For the Germans it is a dogged retreat showing tenacity and grim persistence with the occasional counter punch against the ever advancing Red Army.

Konigsberg: The Soviet Attack on East Prussia, 1945 is very similar to "A Victory Lost" but with added chrome. It uses a chit draw activation system which I love as a mechnicism. As you can see from the photograph below I have replaced the chits with cards for easy of play and because I just enjoy the tactile nature of cards. 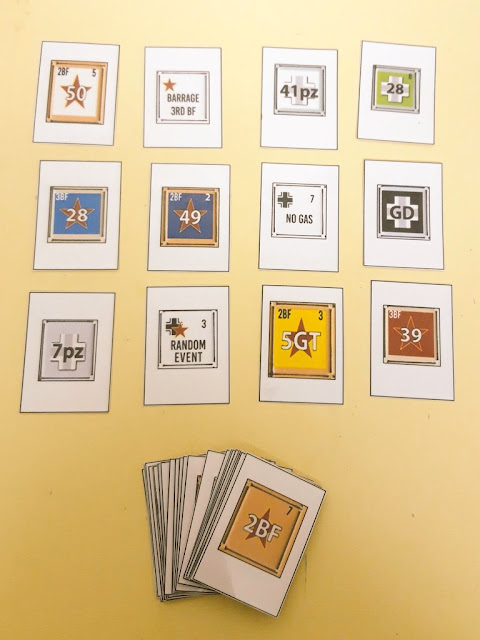 Card replacements for the activation chits.

Rules overhead is low as there are only twelve pages of rules, stacking is only two units per hex with HQ's. Air support is available to both sides but heavily favouring the Russians and naval ground support is provided late in the game from the Admiral Hipper heavy cruiser for the Germans. This ia a battle the Germans can't win but a game they can. 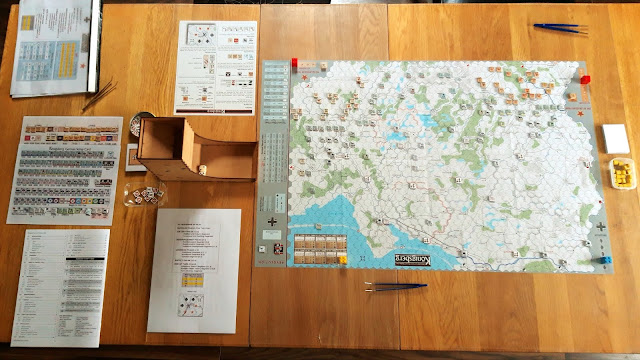 So with the chits punched clipped and placed, additional rules and player aids printed, how to videos watched, rules read and blog updated all that's left is to roll some dice.
Posted by decb at 10/19/2019 No comments:

SLEEVE OR NOT TO SLEEVE? 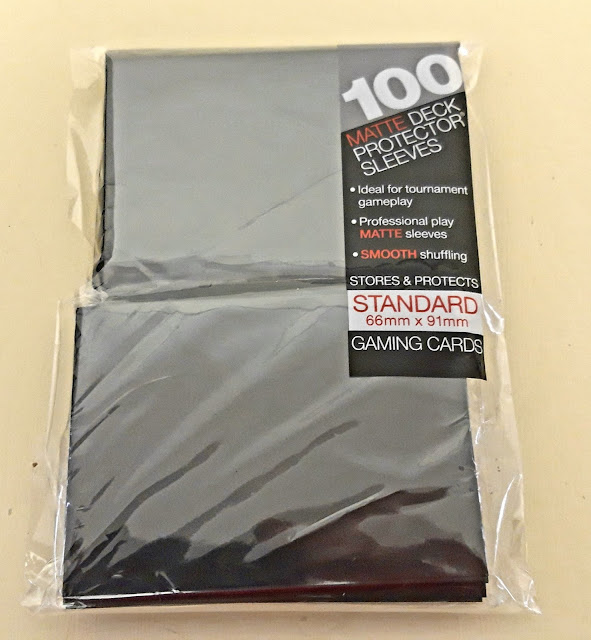 To sleeves or not to sleeve that is the question. What category do you fall into. I tend to be a sleever. In the case of the below game "Hearts and Minds" sleeving is a necessity as there are a number of cards with errata which require printing. "Hearts and Minds" is a card driven game on Vietnam and the American intervention in the country. It has joined my conveyor belt of games purchased and yet to hit the table. This is an ever growing list, which is a great problem to have. 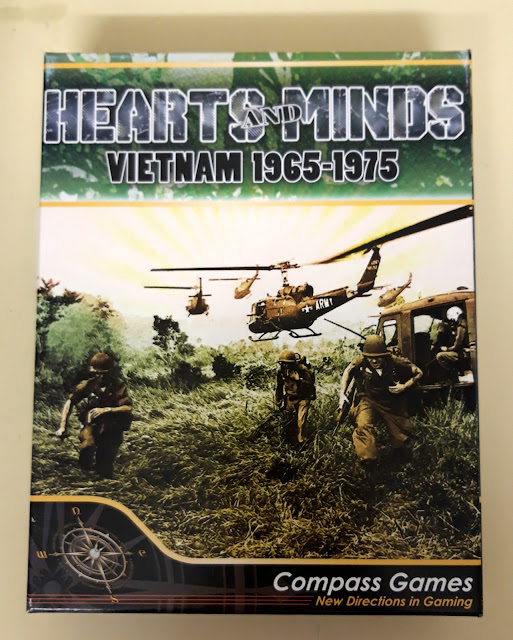 We gotta get outta this place. Hearts and Minds. 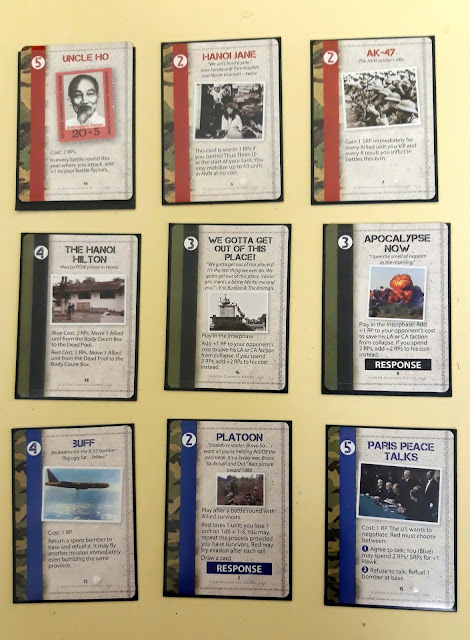 Email ThisBlogThis!Share to TwitterShare to FacebookShare to Pinterest
Labels: Hearts and Minds 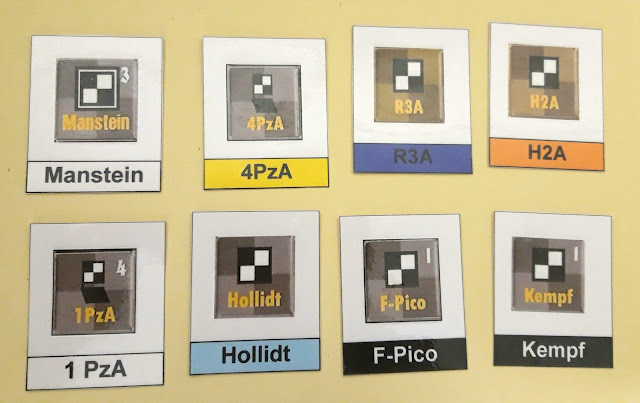 I have been doing a little card crafting. I spent this evening creating some cards to replace the HQ chits used in "A Victory Lost". Instead of drawing the cardboard chits from a bag these cards will act as replacements being shuffled instead. Makes one want to break out this great game again. 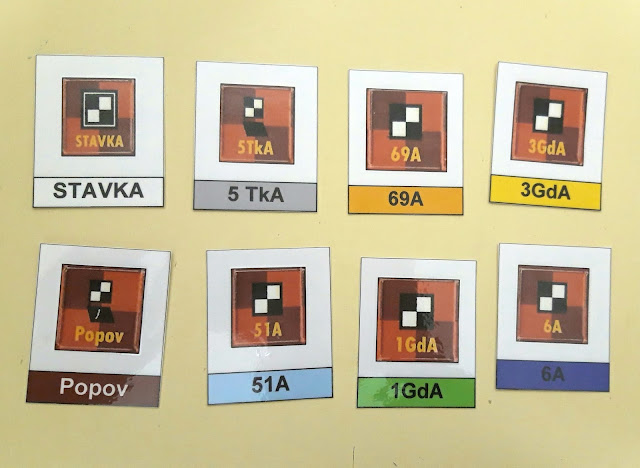 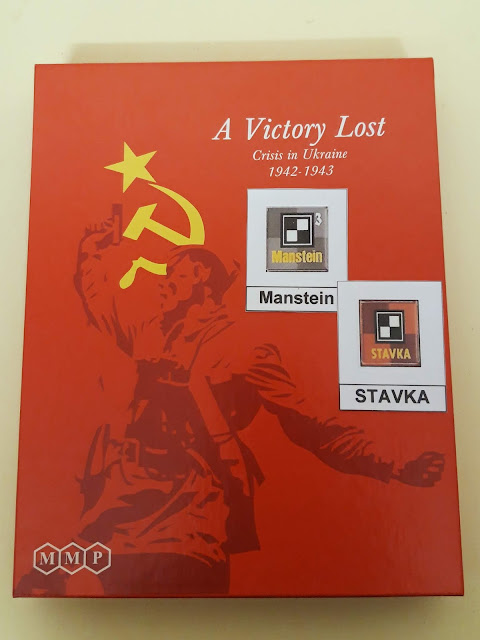 Email ThisBlogThis!Share to TwitterShare to FacebookShare to Pinterest
Labels: A Victory Lost


A short, very short session report on Compass Games Bitter Wood Designer Edition. Sorry about the quality towards the end.
Posted by decb at 8/21/2019 No comments:


Inspired by the views while on holiday in Heidelberg I decided to invest in some wargame goodness. 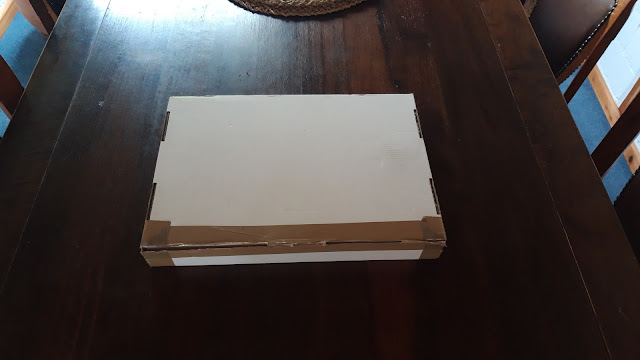 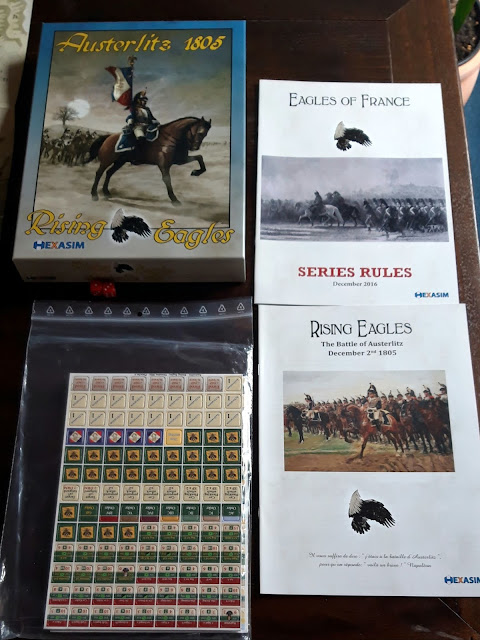 
I have been interested in the " Eagles of France "  games by French company Hexasim for some time. Other games in the system include Waterloo, Ligny and recently released Quatre Bra. I decided  to go for Austerlitz  as I already have a number of products covering  Napoleon's hundred days campaign. So with the game purchased it's time to read the rules, watch the videos, get out the tools of the trade .... plexiglass, glasses and tweezers. 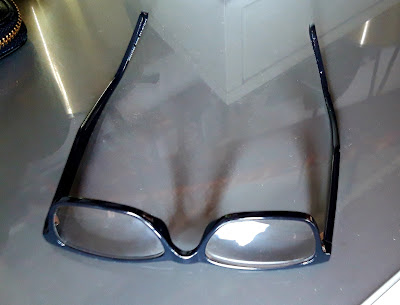 Glasses for my old man eyes. 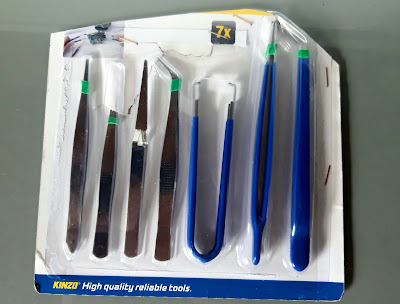