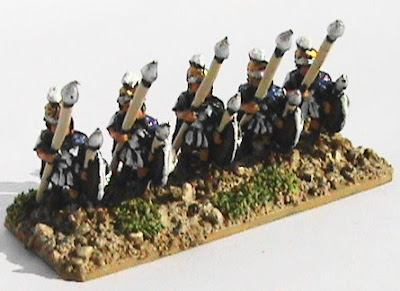 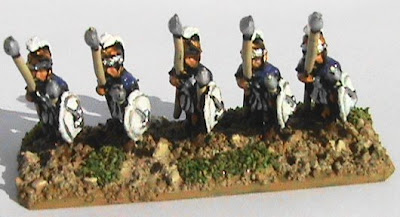 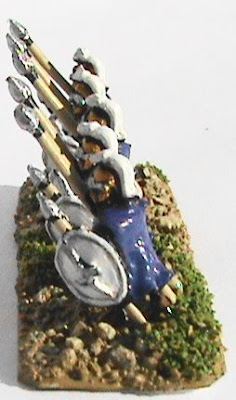 My 10mm Successor army continues to grow with the addition of some Thureophoroi.

The Thureophoroi were a type of infantry soldier, common in the 3rd to 1st Century BCE, who carried a large oval shield called a thureos which had a type of metal strip boss and a central spine. They were armed with a long thrusting spear, javelins and a sword. They also usually wore an iron or bronze Macedonian helmet. The thureos was probably originally an adapted form of Celtic shield. It has been suggested that the thureos was brought to Greece after Pyrrhus of Epirus' campaigns in Italy.

Thureophoroi were usually distinguished from both skirmishers and the phalanx and seem to have operated in a role intermediate between the two types. They often supported light troops and seemed to have been capable of operating in a similar manner to peltasts. The Thureophoroi were well suited to the tactical needs of smaller states, mainly border defense. They were mobile and could rapidly advance over varied terrain. According to Plutarch, they could fight as skirmishers and then fall back, assume spears and tighten the ranks, forming a phalanx.