Our East Front Campaign game continues, it is October 42 and the winter chills are just weeks away. The summer has seen advances for the Germans in the south, with a realignment along the banks of the Dnieper river. The Germans giving up ground for a superior defensive position, Hitler needless to say was not informed. No movement has been made around Moscow with stalemate in the ongoing battles to the south of the capital.

With two months to the end of the scenario my Germans forces face a dilemma. There can't be much in the game, it is finely balanced. I need a few more victory points to be able to bring the campaign into the next winter scenario. I will have to go on the attack using valuable command and control resources to achieve this. Much needed full strength armor and infantry units will be striped from other sections of the front and committed to this attempt. Having studied the front the attack will go in at an existing battle, location B. According to intelligence reports the Russians have weakened armor, mechanized and shock troops at this location. A blitz attack is planned with air support in the hope of destroying many of the defenders, drawing in other defenders or best case scenario achieving a breakthrough striking at Russian army command and control in rear areas. 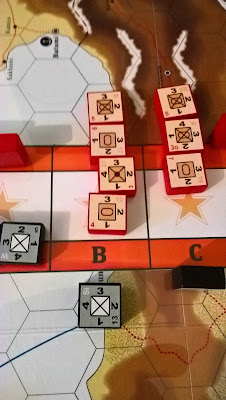 This attack can only go in if the weather remains dry. Meteorologists predict that their is a 50/50 chance that the rains will come and with it mud, slowing all movement and thus rendering an attack impossible. The conditions will only get worse according to the experts with snow or rain forecast for November. The only window available to allow for the successful coordination and organisation of sufficient forces requirement for this operation is the second week in October. All now depends on the weather and mother nature. 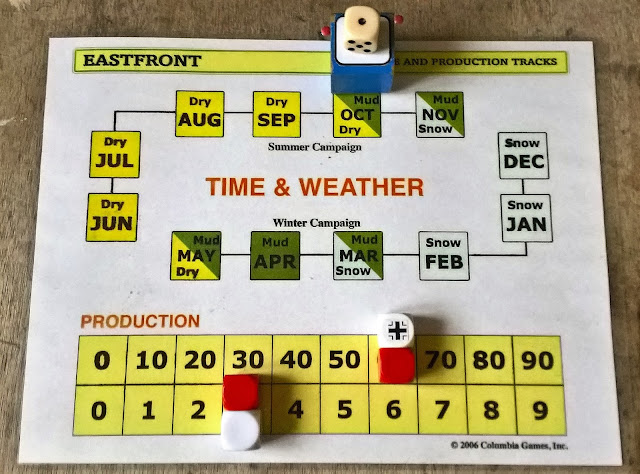 Email ThisBlogThis!Share to TwitterShare to FacebookShare to Pinterest
Labels: Board game, Eastfront