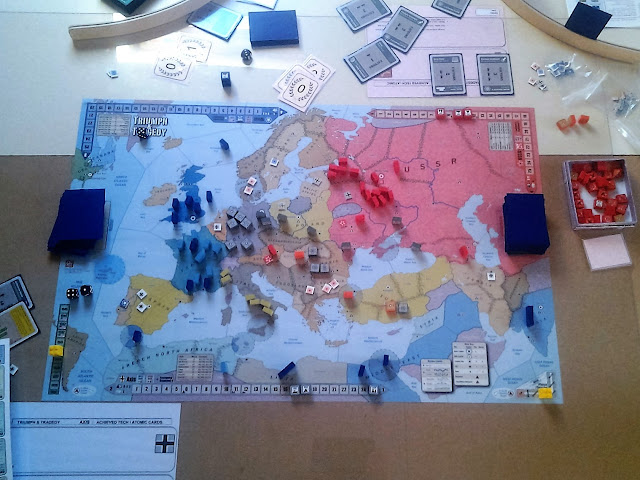 
"Never trust a German especially if they are giving you free vodka."
Joe Stalin

Recently I had the pleasure of playing a wonderful game of  "Triumph and Tragedy" with Steve (the betrayer) and Arthur. Steve has written an after action report, see below, which details the nights events.

At present there is a great deal of soul searching and wringing of hands as Britain considers ‘Brexit’. But ‘Brexit’ is just small beer in comparison to what faced Europe in the 1930’s. The build up to war is the topic covered by ‘Triumph and Tragedy’ – GMT games, and this was the game on the table chez Declan.

Some fellas have a ‘man cave’ – our Deccie has a ‘man attic’ above his garage. It was here that I joined himself and Arthur in an attempt to rewrite history. Just as we settled in, the unthinkable happened – a WOMAN! climbed the rickety ladder and entered the inner sanctum, the holy of holies! All went quiet and Arthur nearly choked on a wine gum he had just pilfered from my sweetie bag (needs watching that boy). The woman was none other than Deccie’s wife – the delightful Sheila (we assume she kindly took him on as some sort of charity project).

‘Declan, who was looking after the children while you were up here?’ We all shuffled uneasily. ‘I thought I heard a child crying earlier’, I helpfully chimed in. Sheila cast her eye over the table. ‘What is all this then?’ ‘We are deciding the fate of Europe’, replied Declan. ‘What, with little wooden blocks???’

Declan had to remind Sheila that we were busy men – she left the sanctum with a final rueful glance.

Crisis over – Declan gave an intro to the rules and concepts, and off we went. I was to play the Axis powers/Arthur, the West/Declan, USSR. The finer points of the game can be read up online – suffice to say that it can be won by achieving economic primacy/military conquest/developing the atomic bomb. Players need to balance resources/population/industry with diplomacy and open warfare *military conflict is not inevitable, but likely. I can only account for my own actions, so the following tale is inevitably seen from the viewpoint of the Axis (particularly Germany).

As a ‘newbie’ to the game I decided that my best chance lay with a quick military victory – the simplest solution when not yet familiar with the game strategies. My plan was to defend in the West, and attack in the East. Germany is relatively strong in the early stages; this seemed the best time to hit the USSR before it could build up. Bluffing a possible invasion of France - I made a Nazi/Soviet pact of non-aggression with Declan. Much vodka was downed in celebration as we swapped tales of torture and oppression – oh, how we laughed! Arthur, meanwhile, was obliged to stiffen the backbone of the shaky French (no change there then), and played with his little boats in the Royal Navy. They splashed about the seas as if they thought they still owned the place – not.

Declan, thinking, his borders secure, went in to diplomatic overdrive. In no time he had political influence over much of central Europe; the Reds were truly under the bed. He even managed to turn Austria in to a permanent Soviet satellite. This affront to the German speaking peoples of the Reich could not, and would not, be tolerated. Arthur correctly pointed out that Declan now had me hemmed in on all sides. This forced my hand, and I had to go to war a year earlier than I would have liked. My panzers charged out of East Prussia and invaded neutral Poland. Lucky dice caused an immediate Polish collapse, and I was free to cross in to northern Russia. Declan spilt his vodka and protested that we had a pact. I apologised for the accidental breach of his borders, and assured him in song that it was a simple ‘mistake’.

My tanks quickly captured a weakly defended Leningrad; if I could take nearby Moscow it was game over. But now the friction and inertia of war took their toll. Declan had just time enough to reinforce Moscow, and terrain restrictions prevented me from making an all out assault. Also, my force was panzer heavy, but light on troops. Tanks get you rapidly to an objective, but they are poor in combat without the poor bloody infantry to back them up. To unnecessary gibes from my opponents, I was forced to retreat back to Prussia declaring that it had all been a ‘terrible misunderstanding…’

It was such a misunderstanding that I quickly reinvaded, and again captured Leningrad. But the problem with Moscow was now as bad, if not worse; with a change of tack I abandoned Leningrad, and sent my panzers on a widespread city/population grab. The hope was that I could end the turn with enough population control to steal immediate victory, Once again though it was a case of close but no cigar – the German bolt was shot.

At this stage the hour was getting late, and we decided to call it a day. Some seven hours had flown by, and credit to Declan for his patience in explaining the game in the face of time consuming picking at the rules (Mea culpa).

The game was played as a ‘learner’, and it is not possible to give a proper assessment without further play. Certainly the game is not trapped in any historical straitjacket. It is easy to see how it could play out very differently every time. Thanks to me there was an early war, but it would be interesting to see how alliances etc play out with an extended period of peace. Again, war is not quite inevitable. My only quibble is that the game would have benefited from a more abstract handling of movement/battle. A lot of time is taken up with sorting out the details, and I felt that that could be much simplified, so allowing more focus on diplomacy/economics. On the other hand, greater familiarity with the rules could well lead to a very different impression.

Triumph and Tragedy on first viewing: very much a ‘thumbs up!
Steve aka Adolf
Posted by decb at 4/04/2016

Email ThisBlogThis!Share to TwitterShare to FacebookShare to Pinterest
Labels: Board game, Triumph and Tragedy

Steve 'the betrayer?'
A kinder phrase would be something like, 'diplomacy challenged'.
Even megalomaniac dictators have feelings and issues you know.
Perhaps this blog needs 'trigger warnings' and 'safe spaces' for those with, through no fault of their own, a mild tendency towards totalitarianism.
Off now to sob on my panzer.
For shame!

Steve I should have added the following disclaimer:

All dictators appearing in this blog article are fictitious. Any resemblance to real persons or fellow grognards, living or dead, is purely coincidental.

Oh, ok then - sorry about the invasion; I think I was hormonal! In fact, in many ways, I was a victim myself.