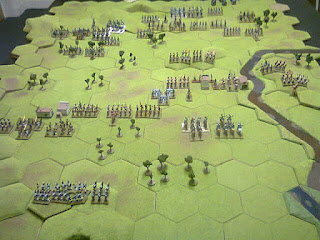 Overview of the battle of Vimiero.

I spent a wonderful few hours, six all told, across the border with Arthur. It began with me being hustled up stairs and into a large room. In that room the above vista greeted me, the battle of Vimiero.

I forgot my camera and had to resort to my mobile phone to take pictures so I hope these are not to sore on the eye. The battle is a Commands & Colors breakthrough scenario, it really does give one the feel of the massed armies spread across the terrain waiting to be unleashed. When I first sat opposite Arthur it was a tad daunting, where to attack, where to defend. 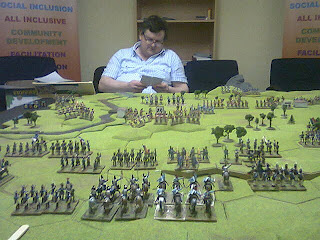 General Bray reviews  his orders, seen from behind the French ﻿lines.

As usual we played with Mr Brays plastic 1/72 scale French, British and Portuguese figures. The landscape consisted of Kallistra Hexon terrain tiles, river sections and hills. While expensive initially the kallistra hex tiles is money well spend when you consider the use one gets out of them. The battlefield is 17 hexes deep by 14 wide resulting in a beautiful expanse of rolling hills, meandering water features and woodland thickets. 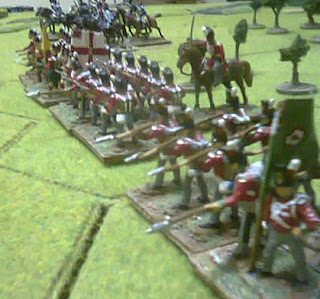 Both games ended in the same result, a French victory. In game one I played the French and after an initial probe decided to play it defensive and let the English come to me. Mr Bray obliged and a massed cavalry attack destroyed his centre. Game two and Arthur playing the French turned the tables and served the same Cavalry charge to my good self, blitzing all before him. 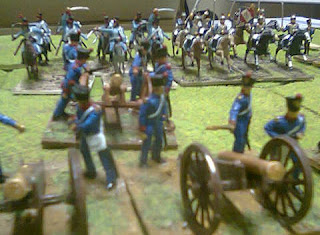 French foot artillery, with French cavalry in the background. 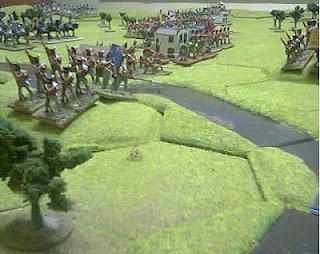 Lessons learnt.
1. Avoid close quarter's fighting with the French as they take no prisoners.
2. Avoid lingering in front of British troops , especially light and rifle units unless you want your troops filled full of holes.
3. Cavalry are deadly, avoid at all times.(anyone got ideas for stopping the horsies)
4. Set aside plenty of time for gaming as you will be left wanting more C&C Naps.
Posted by decb at 2/12/2012

Stop the horse? With other horse, with supporting infantry who fire at them, with artillery combining with the counter-attacking square...

Dale I will have to put your advice into pratice during my next game. The table did look great hope to do a breakthrough game again soon.

What a lovely looking set up. Well done. I'd love to try a Breakthrough game myself, but I think I'll have to get a bigger table.

Conrad really enjoyed the break through game. It takes a little longer to play and set up but looks and feels graet.