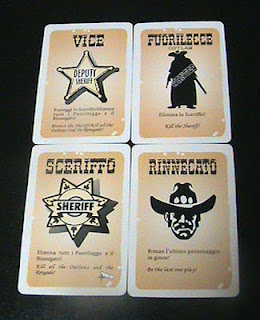 I SHOT YOU DOWN, BANG BANG.

Yee Haaaa how de partners. The Magnificent Seven of the game night regulars turned up for another evenings gaming. Between us we played  Napoleons Triumph, Nuclear war, Space Hulk, Hold the Line and Bang. 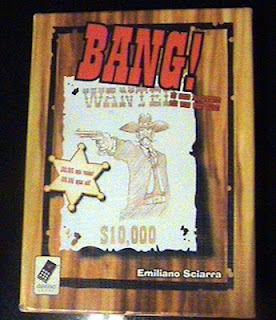 We like to finish the night with a game where everybody can come together after playing in their various groups. This night ended with a couple of games of Bang, a wild west themed card game. You know who the sheriff ﻿is, but who are the deputy's, the outlaws and the renegade. This is a 20-40 min game, with the outlaws trying to kill the sheriff,  the sheriff trying to stay alive with help from his deputy's and the renegade trying to be the last man standing. 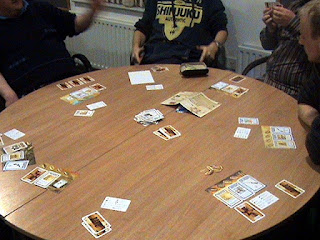 The only down side with this game is that once you are dead you are out, thus downtime waiting on everyone else to finish. A fans expansion is available from Board Game Geek which allows the players killed to return as ghosts and influence the game. I know their are a few expansion's for Bang which may be worth a look at once we get tired of playing the base game. 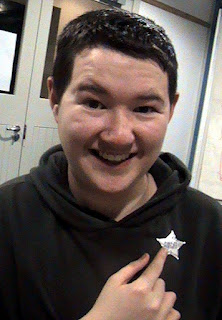 Steve brought along his model helicopter which I managed to get a few snaps off. 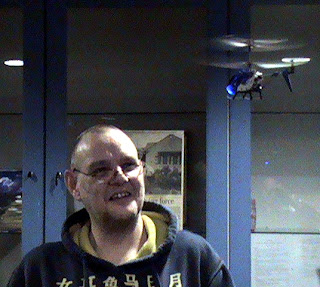 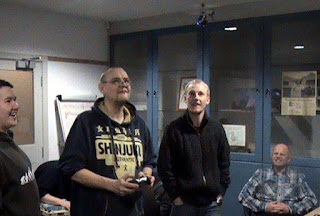 Myself and Arthur played Hold the Line a board wargame set during the American War of Independence. A valuable lesson was learnt here. "ALWAYS READ THE RULES". It was only after we had finished playing that it was brought to our attention that we had being doing the combat wrong. Ah well lesson learnt. We both agreed that we will give this wargame another go. I have kept an eye on Napoleons War: the Hundred days, the Napoleonic version of this game which looks interesting. Both games could be converted to the tabletop by using our Hexon terrain tiles and figures. 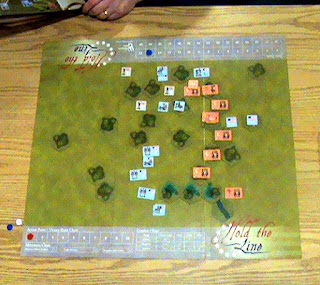 Glen and Steve battled it out at Austerlitz with the board game Napoleons Triumph, pic's below. An interesting game with no dice and hidden movement. To look at it would remind you of Kriegspiel the 1824 rules written by Prussian army officer von Reisswitz Kriegsspiel and used by the German army to train its officers. I have played it once and hope to give it another go when I have given the rules a good once over. 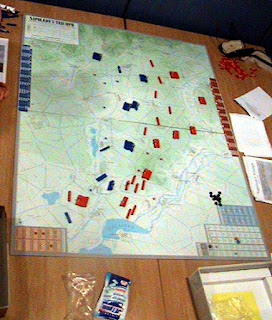 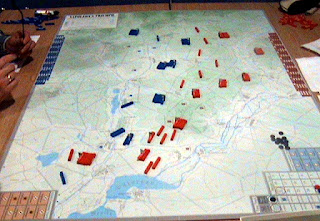 Glen the naughty boy brought along the "Saga" skirmish rule set and a few of Griping Beasts plastic 28mm figures. This has a few of us now looking at Saxons Vikings, Normans and all things Dark Age. "Ohhh no" not another new shinny thing for us Magpie gamers to get into.﻿
Posted by decb at 3/07/2012

Hold the Line is not a bad game, we played quite a bit of Clash for a Continent, its predecessor.