Qcon 2015 has been and gone. Dave S and I made the excursion to Belfast, where we spent Friday evening having a few scoops, as the natives would say. Highlight of Friday evening was attending the comedy club, this year it was excellent with improv rap duo “Abandoman” stealing the show.  The Qcon concert featured “ The Irish Video Game Orchestra” and “The Voice of the Dragon” Choir who performed music from World of Warcraft, Mass Effect, Halo, The Elder Scrolls and much more besides. Sadly I missed the concert which was very good by all accounts. 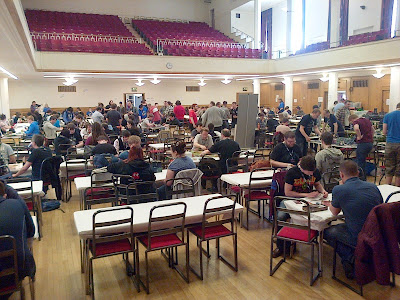 This year the board game area at Qcon had moved to the Whitla Hall, which was a vast improvement on previous years. There was more space, better tables and was clustered with related activities including card gaming (magic etc) and wargame demos.

I didn't play many games this Qcon but those that I did were quality. Saturday I got a couple of warm up games of "Samurai" in, followed by a 6 player game of "Popular Front". 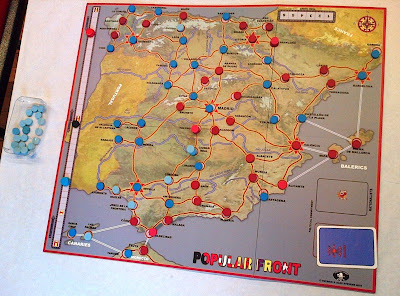 Popular Front is a Euro \ wargame hybrid themed on the Spanish Civil War. The two Dave’s and Garfield played the republican faction taking on Steve, Chris and myself as Franco’s nationalist. I fully concur with Harry Pearson author of Achtung Schweinehund!: A Boy's Own Story of Imaginary Combat a fun light read by the way, who believes that 50 per cent of wargamers are called Dave – that's the law. I game locally with two Daves and met three additional Dave's while at Qcon who wargame. Popular Front was fast playing and didn't suffer from down time as one might expect with so many involved. It went to the last turn of the last round with the Nationalists squeezing out a victory through the political track. Following this successful outing I plan to acquire the expansion Popular Front – Escalation. This expansion offers additional cards giving each faction unique abilities thus increasing the strategic options available to players. 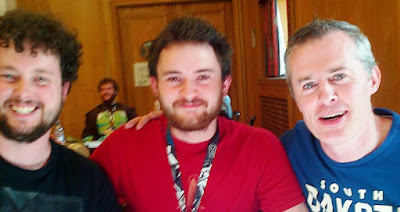 Following Popular Front I introduced Dave F and Dave T to “Sekigahara”. Despite missing an import rule I think I gave the guys a good idea of how the game mechanics worked. 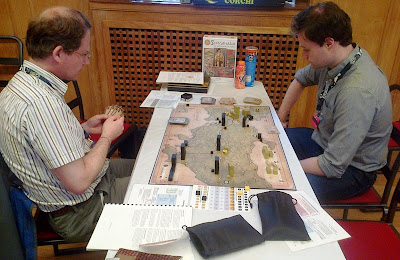 Sunday was dedicated to “EastFront” a Columbia block war game. Dave T agreed to teach me EastFront in exchange for being introducing to Sekigahara.  This is a game I have been looking forward to playing for quite a while. EastFront is very similar to one of their older classics “Rommel in the Desert” see my earlier post here. Supply is everything in EastFront and Dave’s Russians handed my German’s a severe spanking after I left gaps in my advance, which he skillfully exploited to stall my progress. It reminds me very much of "Holdfast Russia" and you can see where the Worthington guys took their influenced from, in producing a streamlined version of EastFront. 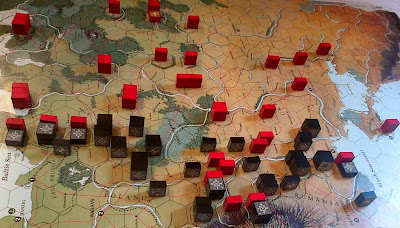 As always it is the people whom you meet and game with at con’s which make them truly memorable. The three Dave’s, Garfield, Steve and Chris proved to be fantastic sports and helped make Qcon 2015 a very enjoyable event.

Email ThisBlogThis!Share to TwitterShare to FacebookShare to Pinterest
Labels: QCON