"We come here with no peaceful intent, but ready for battle, determined to avenge our wrongs and set our country free. Let your masters come and attack us: we are ready to meet them beard to beard. "
Statement before the Battle of Stirling Bridge (11 September 1297), as quoted in History of Scotland (1841) by Patrick Fraser Tytler.

Glen, a veteran of many games and rules systems came a calling in the first of a two night game swap. He came to my place to play Hammer of the Scots (HOTS). I shall be returning the favour with a visit to his pad for "Conflict of Hero's". Hammer of the Scots is a two player block wargame by Columbia games and is themed on the Scottish rebellion for Independence in the 13th Century. As the English player, you seek to pacify Scotland by controlling all the important noble lords. As the Scottish player you seek the allegiance of your fellow nobles in a bid for freedom.

Game play is tense right off the bat. I like games where there are multiple options available yet one is not able to do every thing you want to, HOTS has this. This along with the card play, dice and levy draws, keep the game from being static. It is a clean and clear game system, simple but with depth and has a high replay value.

Sharp eyed, unshaven and with hand rolled fag hanging precariously from his mouth Glen (Scots) took to the game quickly having recently played Julius Caesar, a stable mate of HOTS. Cool, calculating and relentless in the face of weakness, this man was not to be underestimated. Countless confrontations had taught me thus. At the mid way stage of the game I was in control and played it safe when an opportunity to crush the rebellion once and for all was available. A tactic which goes against my naturally aggressive game playing nature. 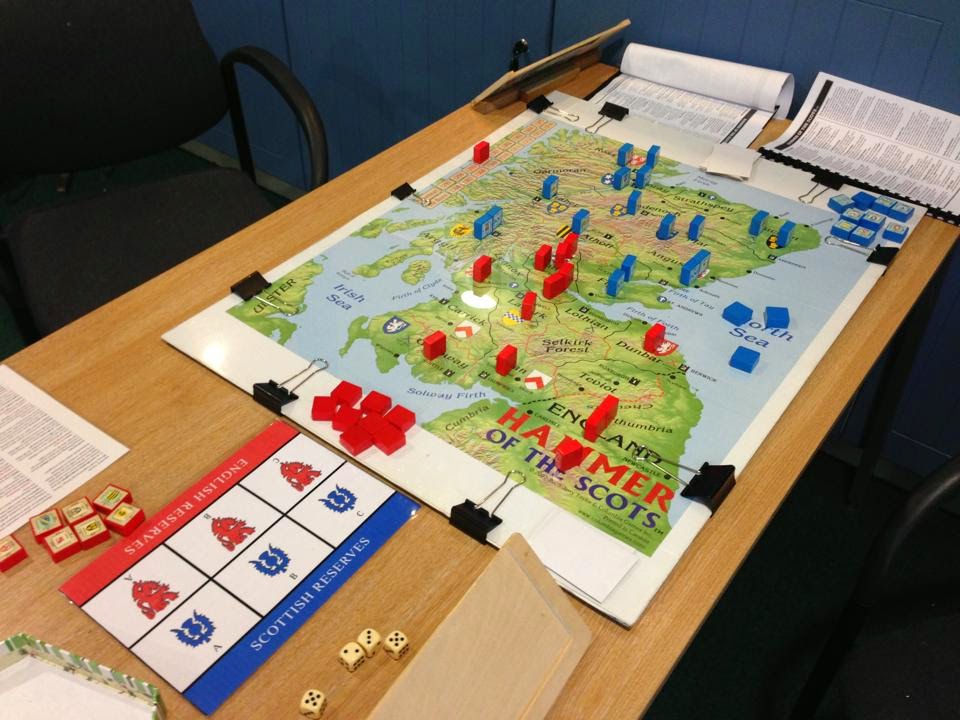 Fast forward several moves and at the second last round the sharp and painful realisation that all could be lost, prompting a desperate scramble for nobles. The last round and Glen had gained ascendancy, "In the name of God" what was I to do! With a two strength card in my hand I planned to rush English troops to the danger areas. I was just about to play it, when at the last minute I swapped for an event card. It could not wait, I had to try and turn one of his nobles.

Glen holding his head in his hands breathed heavily and said in a hushed tone "if that is an event card you have just won". In slow motion I turned the card to revealed the text laid en winning event. Victory to Long Shanks and the English. Scotland was not to be free, more importantly after four hours Glen was to have victory snatched from his grasp at the last second. I was stunned and shocked, having expected the Scotish to gain their Independence. Was this how it was to end, was this how the Scottish traitorous scum were to be kept under the English heel.

Apologetically I shook the valiant losers hand, feeling his pain. A  great evenings entertainment with an even greater sporting opponent. If it had been me who had overcome adversity only to have victory stolen in this manner, then their is every possibility I would have flipped the table and went on a rampage of fire and sword through the house, sparing no one not even the wife.
Posted by decb at 3/09/2013

Sound's like a very fun game!
I still have my Arab Israeli war and Stalingrad kicking around...may have to brush the dust off my tile games!

I went straight home and kicked the dog!
(Not really)
Highly recommend this game, very tense and lots to think about.
Can't wait to try it again.
Glenn.