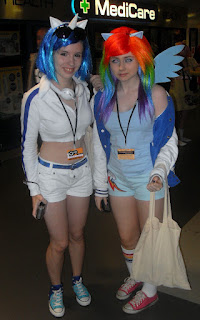 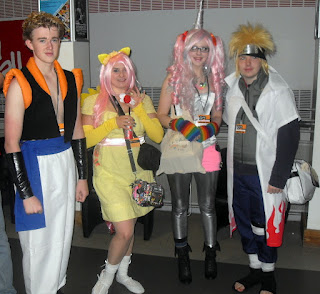 One could not fail to notice that Qcon is Ireland's biggest anime and cosplay event. Cosplay is short for "costume play"  a type of performance art in which participants don costumes and accessories to represent a specific character or idea. From talking to a few regulars at Qcon, its fair to say that Cosplay draws the majority of the attendees.

While waiting for the show to open I managed to grab a few games of Cash and Guns before Arthur arrived and we set off to Relish. In Relish our tables awaited us and we put on a display game of Commands and Colors Napoleonic's.We were located along with other display games beside the RPGers. Arthur had planned to do the battle of Quatre Bras, but left the scenario info on his kitchen table. So some quick thinking was required to re plan and instead we put on Rolica. The usual hexon terrain and 20mm plastics wwere used. 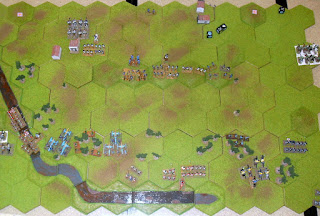 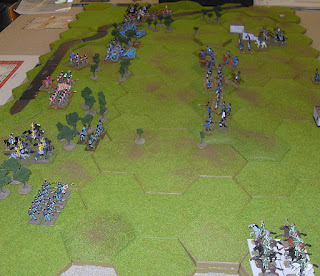 Their was alot of mixing between the various people putting on display game's. We all had a nosey around to see what each table was doing. Dave (didn't get his second name) put on a participation game of Tomorrows War the futuristic version of Ambush Alley. ﻿ 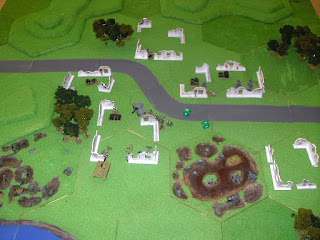 The table beside us had a huge Space Hulk game set up, very impressive. The guys from Portadown's Creative Destruction shop used a total of six Space Hulk boardgames in its construction..﻿ 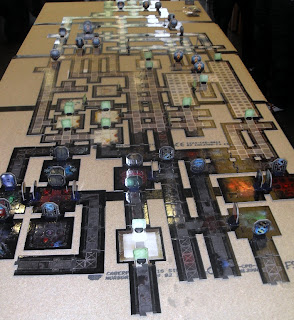 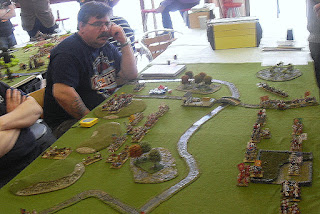 To our right were the FOGer's. Two table's involved in the FOG tournament. I think most of the guys were from Tabletop North and the Ulster Wargame's Society. Arthur and myself had a good natter about all things wargaming with these gents. Sadly this is the best picture I got of their game's. It doesn't do justice to their beautiful 15mm fig's. 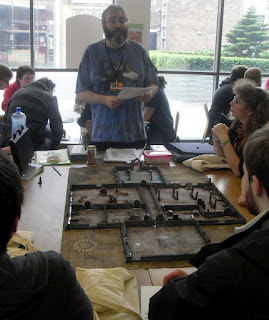 The grand master of the RPG﻿ers.

Their was alot of RPGers huddled around table's at the back of Relish. With various ﻿rules systems being played. I took this photo of one of the games. Dave Spratt, a fellow member of the Loaded Dice Club, was well chuffed with his lot as he managed to grab a few sessions and a larp over the weekend. 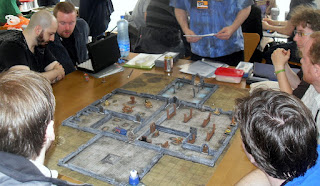 At some stage we organically hooked up with Dave the Pict. Dave originally from bonny Scotland now lives over here. Dave proved to be a top bloke and over the next day and a half we hung out and played various board and wargames.﻿ 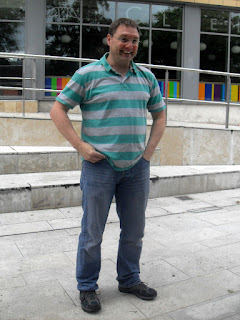 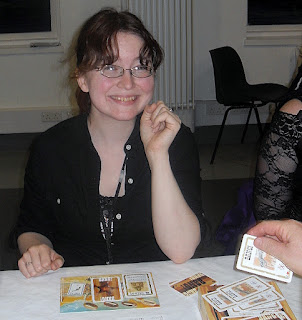 After out Commands & Colors display game, I went upstairs with Dave to the board game area. Here we met Ashley all the way from Oklahoma. Ashley is currently an intern at Queens. While Ashly may look like an innocent young lady she proved to be more than a match for us old guys. Handing Dave and myself our asses on a platter when we played Dominion and Ticket to Ride. We just managed to get Ticket to Ride finished before it was time to vacated the board game area. This was lucky as it coincided with the Spain France game on in the Student union. When we got into the union it wasn't busy but filled very quickly as every Spanish student in Belfast seemed to pick this spot to support their fellow country men. Sadly I was driving and could not exploit the cheap beer, maybe that was a blessing, as I felt rough enough the next morning. ﻿ 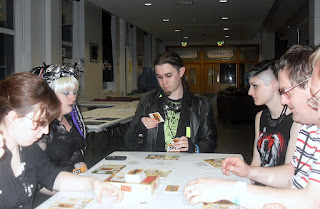 At half time and the writing on the wall for France we headed back to the boardgame area for the card game "Bang". A big thanks to the Dubs Carter, Grace and Rachel you joined us to make up a seven player game. They kindly guided the rest of us as we hadn't played for a while. 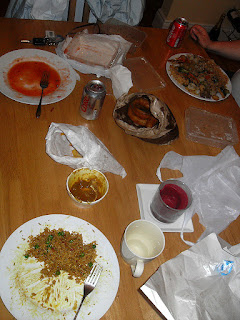 The night ended, as it always does on such occasions with some saturated fats, washed down with a sugary drink. If my body was a temple, it would be a much neglected one and is recovering from a weekends trashing. A detox is much needed.﻿

Ah it was a grand game of bang it was. Glad to help out, even though we confused the issue at times.

Arquinsiel hope to catch up with u guys next year.

We should be there. We'll be at Gaelcon too, hanging around the Battletech games.