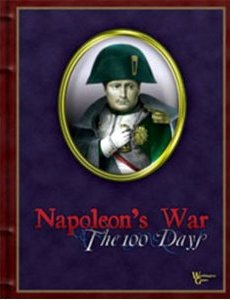 I have managed to snag myself a copy of a game, which I have been keeping an eye out for over the last couple of months, Napoleon's War -The 100 Days. This is a Worthington game and has similar mechanics to their American War of Independence themed "Hold the Line". I am looking forward to refighting Quatre Bras, Ligny, Wavre, and Waterloo. The game includes 120 plastic infantry, cavalry and artillery pieces in blue, red and gray portraying the French, British, and Prussian armies. Check out the link below to see the excellent video review by Marco Arnaudo from the podcast Wooden Cubes and Iron Soldiers.


I have to thank Andy Evans who accepted my offer on Board Game Geeks market place. This was the first time I have purchased a game via this avenue.  It has proven to be quick and painless. I am hoping that this little gem will help to alleviate the lows brought on by the Irish performances during the Euro 2012's in Poland. Hurry up Mr Postman Italy have still to be played.
Posted by decb at 6/15/2012

I think my pal Gorman has a copy somewhere.

Conrad what does he think of it. I have played a couple of games of Hold the line and enjoyed it.