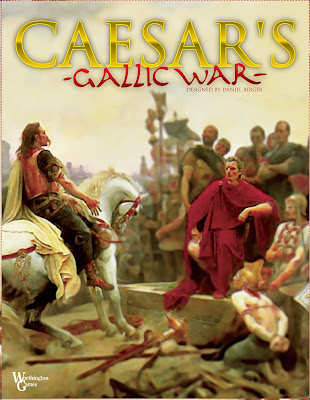 I have managed to play a game of "Caesar's Gallic War", a block wargame by Worthington games. The game is themed around the Gallic Wars a series of military campaigns waged by the Roman proconsul Julius Caesar against several Gallic tribes. Rome's war against the Gallic tribes lasted from 58 BC to 50 BC and culminated in the decisive Battle of Alesia in 52 BC. Rome's victory resulted in the expansion of the Roman Republic over the whole of Gaul, present-day France and Belgium. 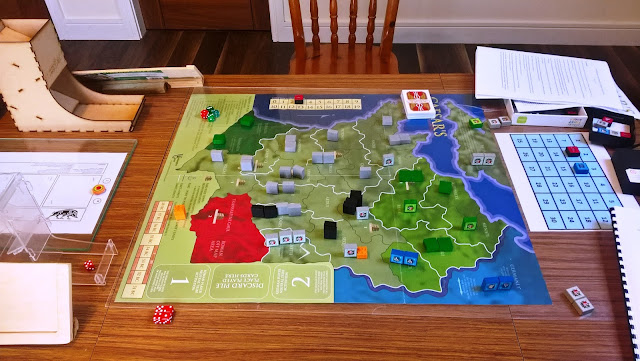 The game feels quite fluid, with cards available to change the allegiance of tribes. It is difficult for the Romans to build a platform to drive the Germanic tribes back across the Rhine without them looking over there shoulder at the ever resentful and potentially vengeful Gallic barbarians who have been subjugated or are allied. We played with the full optional rules, as ever once you have played a game to get a handle on the rules you can focus on strategy in subsequent plays. One slight issue I have with the game is the graphics. My old man eyes struggle to make out what tribe each block belonged to. The tribal names could have been increased in size or used clearer font. It's a bit early to tell if this is a keeper or if it should go on the trade list. The initial signs are good however. A couple of plays should reveal all.
Posted by decb at 11/06/2016