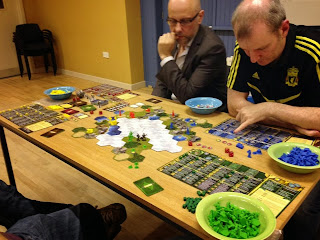 "The Loaded Dice Club" has been vibrant over the summer with new members in attendance and a wide variety of games hitting the table. As always its great to see new faces, who are all very welcome.

A number of games have proven to be popular recently. I managed to break out "Twilight Struggle" after a year and a half's hibernation and introduced it to fellow club members, some of whom have really enjoyed this cold war classic. "Clash of Cultures" has also gone down well, with good reports on this Z-Man civilization game in which each player leads a civilization from a single settlement to a mighty empire. You can listen to the excellent "How to Play" podcast and learn the rules to the game here.

I have really enjoyed playing "El Grande", a wonderful area control game. Players take on the roles of Grandes in medieval Spain. The king's power is flagging, and these powerful lords are vying for control of the various regions. This is certainly not a new game but a wonderful award winning oldie. I had been watching out for a copy of El Grande on eBay for some time and found the second hand copies expensive and hard to come by in the UK. So I turned to ebay.de to purchase a copy which came in a beautiful large metal tin and included Carcassonne for the bargain price of £24, most of which was postage. 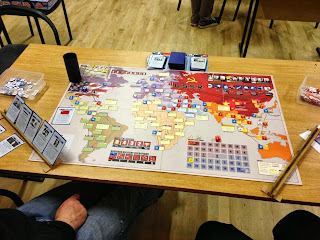 Its been a while since a historical wargame was played at the club and recently Arthur and Glen put on a "Saga" dark ages skirmish scenario. The Vikings were to triumph, putting the Anglo- Danish troops to the sword.

It should not go un mention the culinary skills of Godfrey who has provided sustenance to all over the past weeks in the form of the most wonderful cup cakes, chocolate and chip banana cake and chocolate brownies. Attendance to the club is mandatory if only for his produce. 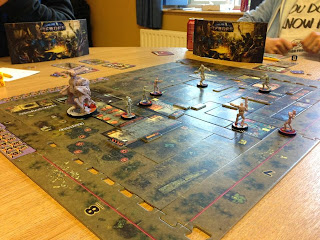 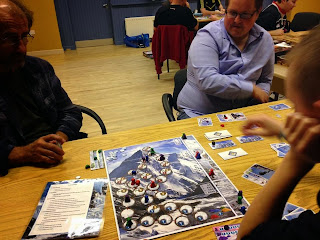