THE CULT OF THE NEW.

Eclipse is a new 4X Space Strategy board game, from of all places Finland. In 4X games players control an empire and "explore, expand, exploit, and exterminate hence the 4X.

A game of Eclipse places you in control of a vast interstellar civilisation, competing for success with its rivals. You will explore new star systems, research technologies, and build spaceships to wage war with. 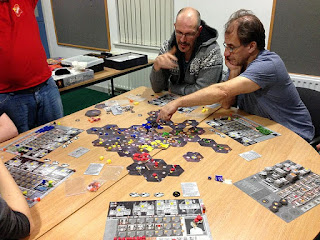 From talking to the guys their is a steep learning curve in terms of the rules. But a fun game awaits once you know what you are at. It might be worth checking out the How to play Podcast which in episode 31 details the rules of the game.

While the rest of the guys were busy exploring space. Steve introduced us to Sherlock Holmes Consulting Detective.

In Sherlock Holmes Consulting Detective, you are presented with a mystery to solve, and it is then up to you to trace the threads of evidence through the byways and mansions of nineteenth century London. You will interview suspects, search the newspapers for clues, and put together the facts to find the killer.

For an excellent overview of the game check out Marcos video.

I have often thought that I would like to try a murder mystery night. This scratched that itch and would provide a wonderful evenings entertainment for gamers and non gamers a like.