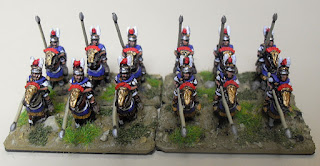 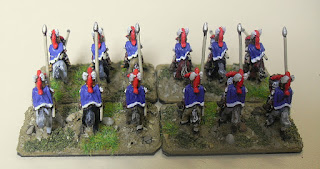 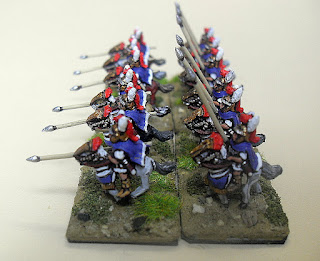 10mm Successor Companion Cavalry. The "Companions" were the elite cavalry of the Macedonian army from the time of king Philip II of Macedon and reached the height of their prestige under Alexander the Great.
In battle, it would form part of a hammer and anvil tactic: the Companion cavalry would be used as a hammer, in conjunction with the Macedonian phalanx-based infantry, which acted as their anvil. The phalanx would pin the enemy in place, while the Companion cavalry would attack the enemy on the flank or from behind. In battle Alexander the Great would often personally lead the charge at the head of the royal squadron of the Companion cavalry, usually in a wedge formation.

I use these figures as heavy cavalry for Command and Colors Ancients. They are best employed to punch holes and divide up the enemy lines. Be careful however, as you must provide room for them to retreat or they can be destroyed if caught.

These figures are by Magister Militum and are from their Ancient Successor range.

Some fine looking fellows - give my regards to Davey when you see him next.

Looking forward to his dispatchs from the front at the next club meetup.