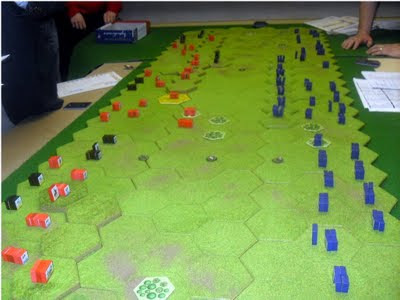 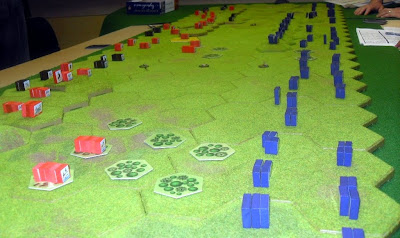 Some photos of the recent EPIC Commands & Colors Napoleonic game held in the battle bunker, upstairs in my garage. The game was played with C&C Naps blocks , terrain tiles and hex terrain from Kalistra. We played four aside with an overall commander, 3 sub commanders. One each for the centre, left and right flanks. Glen prepared the scenario and adjudicated, keeping the game moving along.

To quote the Duke of Wellington, it was a 'Damn close run thing'. The French eventually prevailed taking a vital village in the centre to carry the day. The battle took five hours and was great fun swaying back and forth as one side and then the other held the initiative. Everyone present enjoyed this EPIC version of the game. It has inspired us to give another scenario a go at some stage.

Check out this great C&C Napoleonic fan site for idea's and inspiration:

What was the scenario?

I'm anxiously waiting to get my own EPIC game off the ground.

Conrad it was a home grown Waterloo scenario. Have to say it was great fun. A few of the guys have 6mm , 10mm and 20mm plastic figs. So we hope to get them on the table soon.

It was a really good game, I really enjoyed it.