Finally managed to get Napoleon's War: The 100 Days to the table recently. Fellow grognard Arthur came a visiting and we got to refight the battle of Warve. 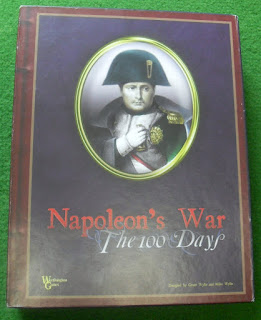 The system uses hex movement and an Action Point (AP) Allowance System , where each player is allotted a certain amount of points per round. These points can then be spent on available actions. Either moving, firing, rallying or shock combat until the player no longer has enough points remaining to purchase any more actions.

In the box you get three good sized dice, a rule book, two double sided scenario sheets. Four maps of the battles Wavre, Waterloo, Ligny and Quatea Bras all on two double sided cardboard maps. This card is off a poor quality and very light. It will require you to place flexi glass or glass over the map to hold it down in place. 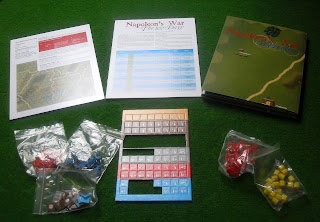 Also included in the box are 120 plastic pieces in blue, red, and gray. These miniatures portray the French, British, and Prussian armies and are made up of cavalry, canon and infantry figures. 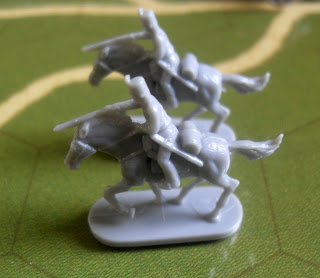 Three or four infantry make up an infantry unit, depending on nationality.

Because cavalry or infantry can stack with canon on a hex it can leave little room on that hex. I found it was necessary to paint the rear of a canon white to reflect a unit strength of one as opposed to the  unpainted full strength unit. This left more room on the map and less fumbling for figures. 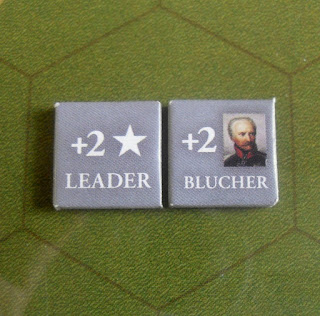 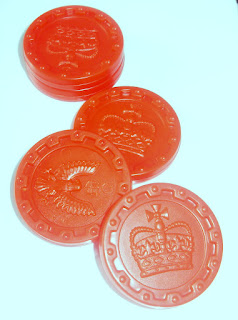 I found it preferable to use plastic coins from the kids Connect 4 game to managed the "AP's". Alot more tactile and less fiddle that the little card chits provided. I also used the Connect 4 coins and rack to manage the victory points.
My clash at Warve with the Butcher Bray lasted just over an hour and a half. He won the toss and took command of the French while I took the Prussians. My two leaders, including Blucher, fell early on in the fierce hand to hand fighting to hold the French back at the bridges in Warve. As a result my command and control quickly went to bits as la blues broke the Prussian line inflicting terrible casualties. 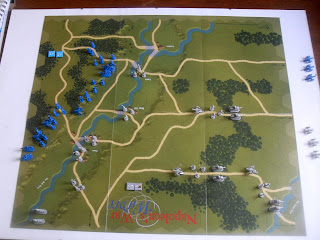 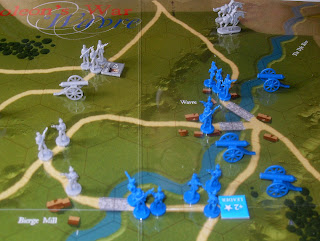 French push the Prussians back from the vital bridges. 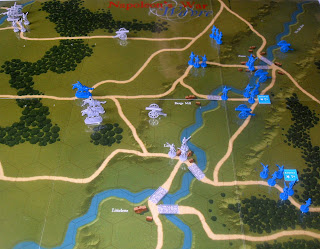 Victory for the French. 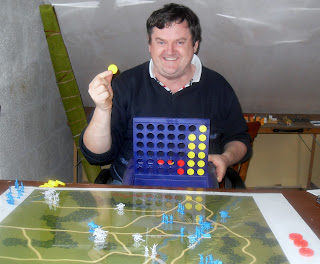 The butcher proudly displays his medals.

Napoleons War : The 100 Days is a light wargame. The system does induce tension as the players can't do everything they want to do each turn. The players must choose where to allocate the valuable action points. On the down side some of the components, map and chits for example let the game down and do need an upgrade. Despite this, its an entertaining and fun wargame.

How do reckon to stacks up with CCN?