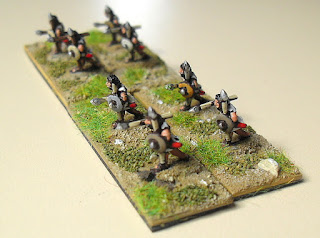 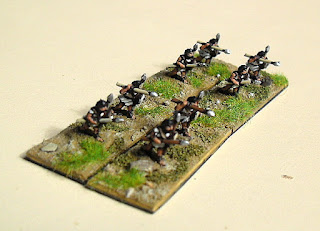 Another of my instalments on Commands and Colors Ancients and its conversion to the tabletop using 10mm figures. These figures are by Magister Militum and are being used as light troops. With two figures to a stand and four stands to a unit.

The light infantry are the weakest in the Commands and Colors Ancient system but used well can be quite effective. They are best employed to screen better forces or to harass the enemy with ranged combat.  They must evade direct close combat in most circumstance. Like all skirmish troops they are most effectively employed in terrain- forest, hills and broken ground.

Their shooting can have an attritional effect if the Dice Gods are with you. So always sacrifice a goat before the game, the Dice Gods love goat. I have found them useful to harass formed units, fading away when confronted to reappear with more ranged combat. Its great to use light troops to pick off a weaked heavy or medium unit towards the game end and gain that all important winning victory banner.

I also like to employ light units to hold up and harass enemy units attempting encircling manoeuvre's or use them to defend a river crossing. They get to roll the same two dice as other units at a river so their relative weakness in normal play is less off an issue.

So light infantry, light weight they are not if used well.