HANDS IN THE SEA 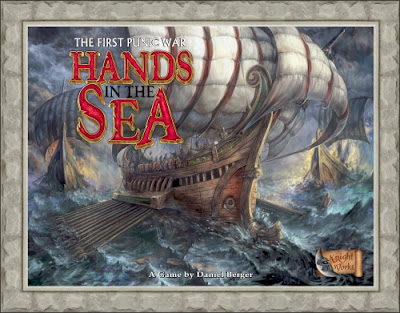 Hands in the Sea.

"Hands in the Sea" a game on the first Punic War between Rome and Carthage 264 - 241 BC, by designer Daniel Berger and Knight Works. I have been following this game for quite a while and was very much temped by the first kick starter two years ago. I'm glad I held off as there were a few issue with the game board and cards, these are to be fixed in the second edition which is now live on kick starter.

The game has blocks, is card driven and uses hand management. It was inspired by Martin Wallace's "A Few Acres Of Snow". This was another game I had been temped by but lost interest once it became clear that it was broken with the "Halifax Hammer strategy". "Hands in the Sea" has a good reputation and is a solid 8.0 on "Board Game Geeks "ratings. The wooden components look top notch, playing time is a very manageable two hours and the price is reasonable (compared to some off my recent purchases) coming in at under £50, which includes postage.  "Hands in the Sea" is the first kick starter I will have backed and very much look forward to its potential arrival next May, hopefully it makes its funding target of £20.000.

Check out Judd and the Chiefs review.

Email ThisBlogThis!Share to TwitterShare to FacebookShare to Pinterest
Labels: Hands in the Sea