A SALUTE TO WATERLOO.

A SALUTE TO WATERLOO.

Napoleon is reputed to have commented:
“That regiment with castles on their caps composes of the most obstinate mules I ever saw; they don’t know when they are beaten.”

The Duke of Wellington paid tribute to the ‘Skins’ saying:
“They saved the centre of my line at Waterloo.”

I recorded the short video above of the "27th Regiment of Foot" an Irish Arms re-enactment group.The video was taken at Enniskillen Castle Museum while attending "A Salute to Waterloo - Honouring the Inniskillings". The occasion was the flagship commemorative event by the Inniskillings Museum for the bicentenary of the Battle of Waterloo and honoured the pivotal role of both the 27th (Inniskilling) Regiment of Foot and the 6th (Inniskilling) Dragoon Guards at this epic battle which marked a turning point in European history. 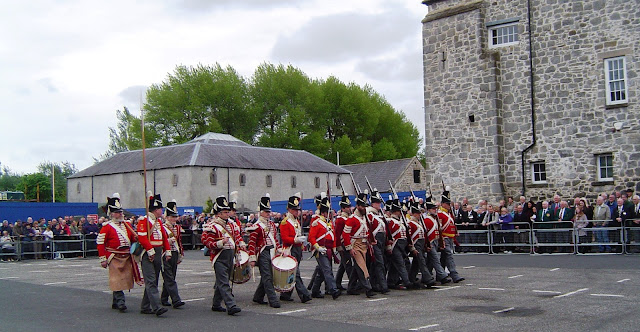 While there I was also lucky enough to attend a short lecture by the excellent Peter Molloy entitled "Two Enniskillen Regiments at Waterloo". Peter detailed the role played by the 7th Regiment of Foot and the 6th Dragoon Guards at the famous battle. He brought to life the events and the horrors faced by these fellow Irishmen almost two hundred years ago. 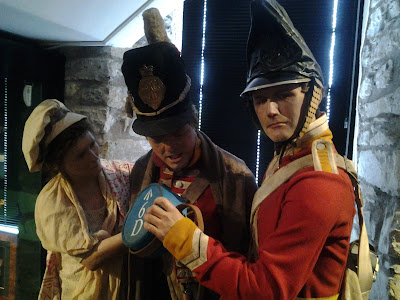 Private McMullen being helped from the field.

The scene above shows Private McMullen who came from a weaving background in Downpatrick. He was seriously wounded after coming under French cannon fire at Waterloo. His heavily pregnant wife Elizabeth was with other wives nearby and fearing her husband dead she dashed into the midst of the bodies. She was hit on the leg with a musket ball but discovered her husband still alive and managed to drag him to the edge of the battlefield. Private McMullen lost both arms because of his injuries.The then Duke of York was told of their bravery and in a personal visit to them in hospital in Chelsea he agreed to be godfather to the infant, who was christened Frederica McMullen of Waterloo. 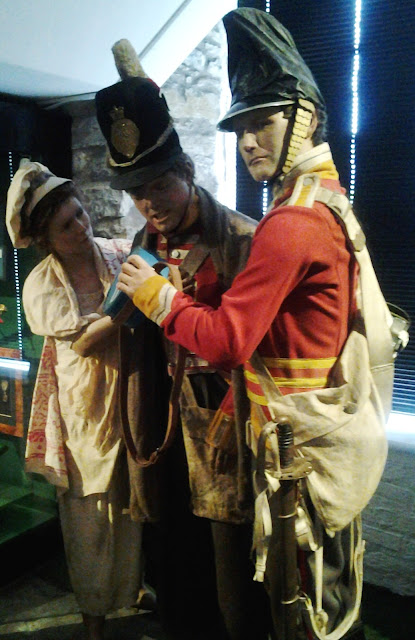 Elizabeth goes to the aid of her husband. 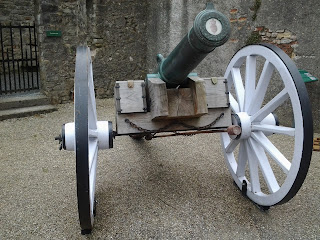 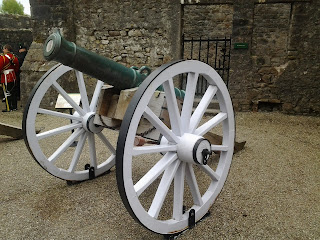 The Allies had 127 cannon at Waterloo.

It was a wonderful Saturday afternoon spent wandering the various galleries and castle grounds with my son and his friend. Well worth a visit if you ever find yourself in the Erne county and Enniskillen.
Posted by decb at 5/31/2015

Email ThisBlogThis!Share to TwitterShare to FacebookShare to Pinterest
Labels: C and C Napoleonic's, Museum, Napoleonic, OTHER

Many thanks for the kind words! Did we get a chance to chat on the day?

Peter I was the chap who asked the question " Could the little man ever have won the campaign ". He had two hopes and one of them was not Bob.

If you are ever in the Erne county giving another lecture on a similar subject please let me know and I can get a crew to attend. Really enjoyed your talk.

Just realised you are a grognard Peter. Next time you are up we need to get a game on the table.

Ah, of course, I can place you now, Declan! You had your son with you at the front, didn't you? You're very kind - to be perfectly honest, I really dread any kind of public speaking, so it's really nice to get positive feedback!

I'm probably more of an aspirational wargamer than anything else. My biggest problem has always been just getting on with it and putting paint on the figures!

It looks like a great group you have up there. Do you meet in Enniskillen itself?

Peter we meet at each other homes and at a local community centre in Tempo just outside Enniskillen.