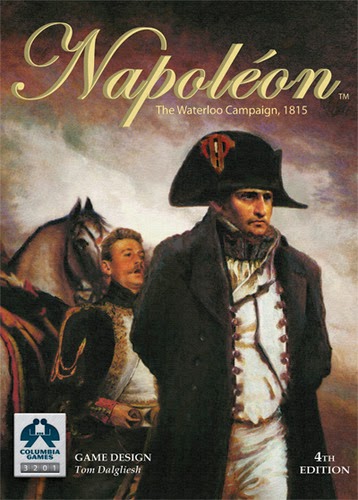 On June 18th 1815, one of the most decisive battles in military history was fought in the Belgian fields at Waterloo, twenty miles south east of Brussels. Within a short 100 days, Napoleon, former emperor of France, had returned from exile on the island of Elba, seized power, quickly assembled an army, and marched to take on the dispersed British and Prussian armies preparing to invade France. 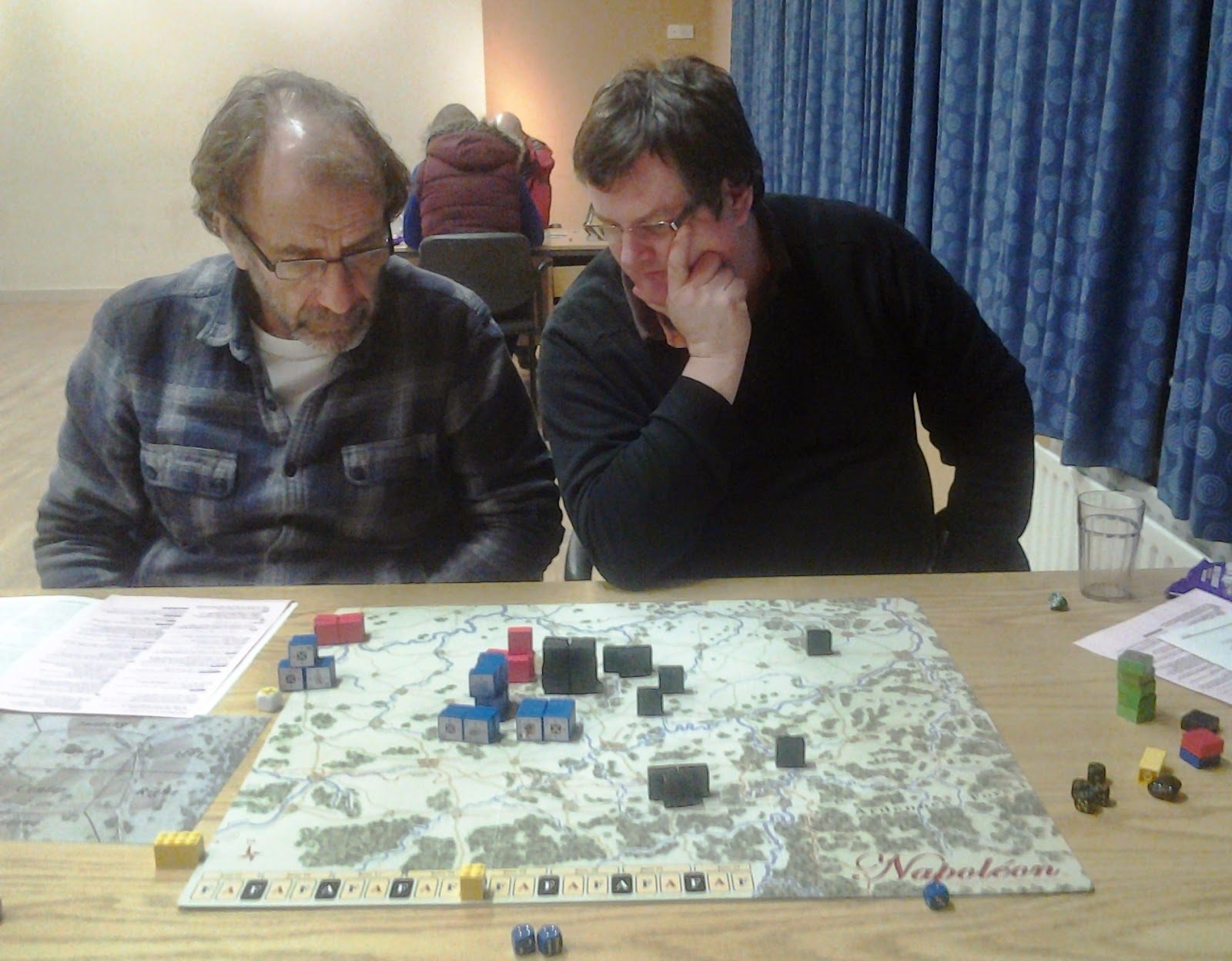 The two gentlemen above, Wellington on the left (who has a striking resemblance to an extra from a recent Game of Thrones episode) and Blucher, are tasked with dealing with the small matter of Napoleon. Hunched over their campaign maps these veteran commanders pondered what to do next. Sadly for me, their pondering proved correct, as they combined their forces to crush my weakened Grand Armee.

On the small matter of Napoleon, British propaganda, which portrays Napoleon as below average height is thought to be false. Napoleon's height was actually average for this time period; the average 18th-century Frenchman stood at 5 ft 2 inch (1.57 m). Historians have now suggested Napoleon was 5 ft 6 in (1.68 m) tall. Napoleon was often seen with his Imperial Guard, which may have contributed to the perception of his being short because the Imperial Guards were above average height for their time.

Columbia games, 30 year old  block wargame Napoleon: The Waterloo Campaign 1815 got an outing at a recent club night. Looking at these photos taken a couple of months ago, makes me want to get this classic to the table again. I have the new fourth edition Kickstarter version, which has the foil stickers on the blocks and a larger map than previous editions. It is a fast-playing game that depicts the Waterloo campaign with a good deal of flavour, tension and simplicity. The game combines strategic movement and tactical battles. It gives one a real sense of the importance to each of the commanders of the road networks. It is suggested that the game is unbalanced with the French up against it, particularly with new players to the game. Battles are resolved on a battle board side map with terrain features playing their part in the battles outcome. 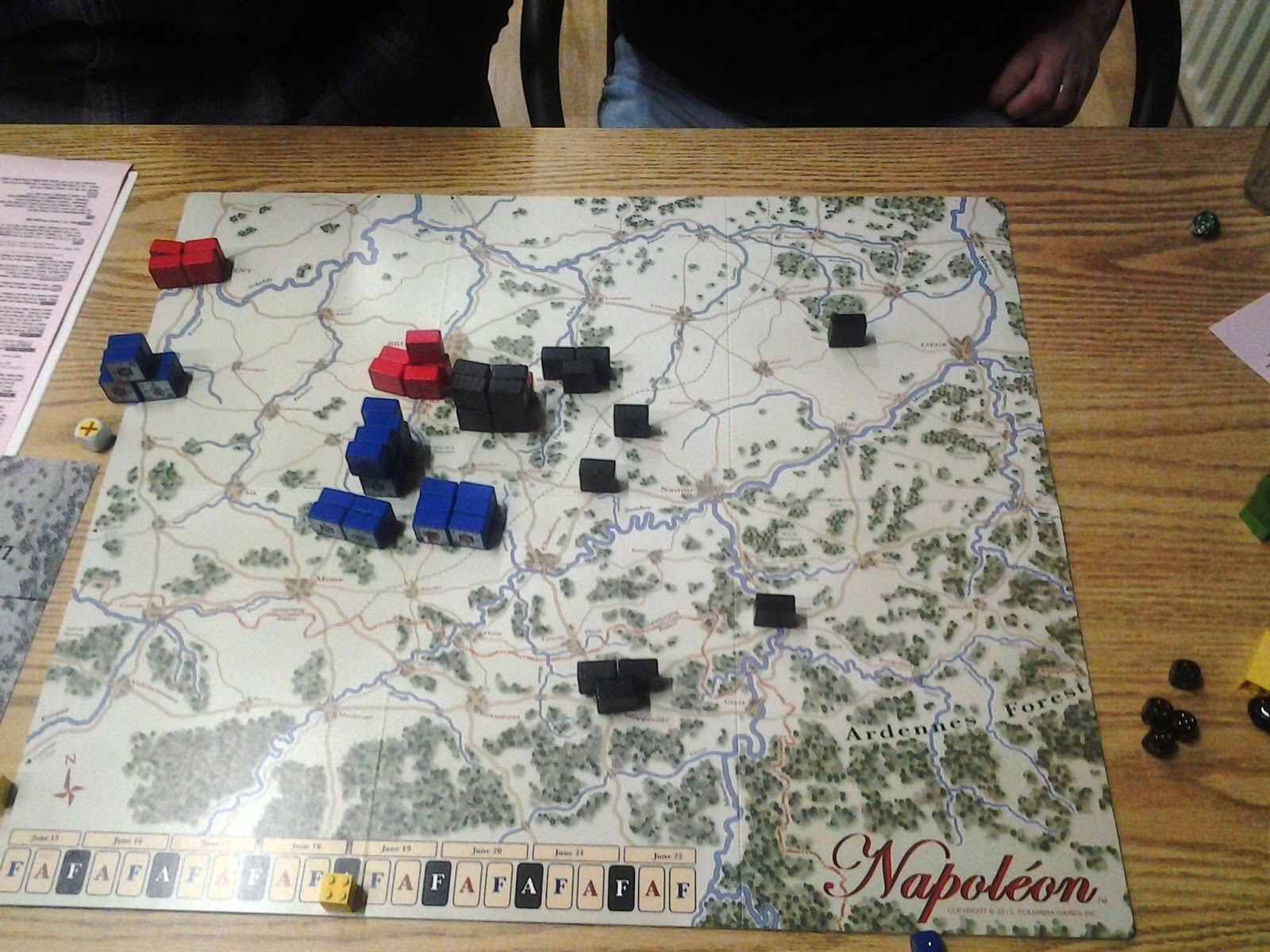 It is worth checking out Napoleon: The Waterloo Campaign 1815 video review by Marco Arnaudo which will give you a feel for the game.

Right I'm off to raise an army, stack a few blocks and free France, au revoir.