WHY CAN'T WE BE FRIENDS!

(and I would have, only for those pesky kids)

Well I have finally buckled under the pressure from my gamer mad hubby, and I truly mean game mad because if he is not playing games he is watching them or listening to pod casts about them!(pressure I feel to be a tad harsh dear, guilt tripping I will accept)

Anyway I decided to see what all the fuss was about and joined in a family game of 'Escape to Atlantis's' (a fun screw your neighbour game). Dec and the kids had already had a couple of games under their belts so I really was coming in fresh faced and more than a little wet behind the ears, pardon the pun!

Declan in his usual meticulous manner carefully set up the game and then told us all to put our men (meeples dear) counters on the various tiles of either sand, forest or mountain - I was not fully sure which were the best tiles to choose but followed the lead of everyone else. 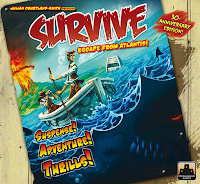 Our 8 years old was showing great confidence and telling me to relax, as the game would unfold as we progressed and I would pick it up. Everyone seemed to be out to get the new comer (newbie), firstly I was attacked by whales, which toppled my little men out of their boats into the sea and I had to make a swim for it, but then came the sharks and Sea Monsters which completely killed me off. I tried to swim to dry land but unfortunately was eaten alive!

Dec in the meantime was plotting his victory well. Getting two boats and at least 3 men to safety, killing what he could on his way. Our youngest was doing brilliantly for his mere four years of age, he headed for shore and got 3 men safely to the beaches, using shark cards and a sea monster to stub out the competition. My daughter was moving well but the boys were cruel to her as well (the old boys against girls pact having been agreed pre game), so she could only manage to get one man to safety.

As we moved through the game Dec was showing signs of victory and he was the man to turn over the volcano tile, triggering the games end. It was time to count the value of those men who had made it to safety. Confidently Dec lifted the men and turned them over to reveal their value - Dec's men came to 10 points but the four year old dynamo had out witted the rest of the family with a grand total of 11!

Sounds of the victorious cheering( by all the family members excepted the crushed me) could be heard on the far side of the moon as a stunned Declan could only look on in shock - the boy had beat him AGAIN.

Email ThisBlogThis!Share to TwitterShare to FacebookShare to Pinterest
Labels: Board game, The Wifee