Some time ago on E bay I acquired some spare plastic tanks from 1970's Tank Commander game by 'Ideal'. My brother and I had some serious fun with this little gem back in the day. The game consisted of a large plastic 'battlefield' . Each player had four tanks and the objective of the game was to force the opposing player to retreat into a minefield. Movement was decided by the use of numbered shells of varying firepower from one to ten. Once your enemy's tank was over the shell hole you pulled the cord and "kaboom".

Next I purchased some American and German World War 2 infantry from Valiant miniatures. These I am still painting, almost a year later.
http://www.valiantminiatures.com/

I then purchased a deck of Memoir 44 cards from Days of Wonder and created a battle board for the game. 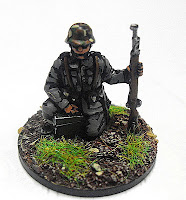 http://www.daysofwonder.com/memoir44/en/
Tonight my opponent after numerous battles managed to beat me in a game of Memoir 44. Around and around the table he marched, shouting "I am the champion, I am the champion". Later he was overheard, boasting to my wife about how he had destroyed two Tiger's and halted the Jerry advance. This was not good. Oh the humiliation.
My four year old son was victorious, where now for his old man!﻿
Posted by decb at 11/17/2012