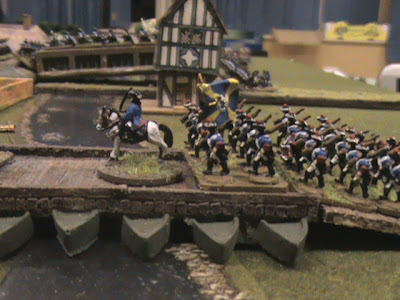 1757 November, The Austrian army, under General Bray, is preparing winter quarters, when the Prussian General Regimus, decides to launch one last offensive on the flank of the Austrian positions.
Near the town of Dooneendorf, Prussian cavalry discover two bridges spanning the Alban river. As the Prussian army marches to the crossing point, the two cavalry brigades cross into the enemy rear. First brigade, made up of grenadiers and veterans, also makes the crossing but the weight of horses and men has caused the bridges to crack. The rest of the army has to cross in single file, causing delays and holding the other five brigades out of the battle.

The Austrian army is finally aware of its peril and sends cavalry and four infantry brigades to support the troops holding “Hell Hill” on the Prussian right. The hill is already under assault from the Prussian grenadiers.

At Hell Hill, things are going no better for Austria. Assaulted by the elite of the Prussian infantry, the Austrian brigade suffers badly and is finally caught in a charge by the grenadiers. Beaten and broken the Austrian troops stream down off the hill. Their panic soon spreads to the rest of the army. There is nothing left for General Bray to do, but call a retreat and try to save some of his men. The Austrians flee the field leaving the Prussians to celebrate their most one-sided victory ever.
Estimated casualties run to 18,000 Austrians for a loss of 1,500 Prussians.