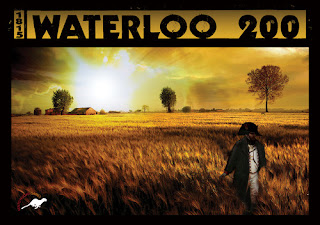 Around about this time last year I did a blog post on  my most anticipated games of 2015. Two of the games I acquired; "A Victory Lost" and recently "Victory in Europe". The other two games featured in the post; "Warriors of Japan" and "Hands in the Sea" have yet to be released. I thought that I would do a similar post on what is on my gaming radar at the moment.  Not all of them new games, but all tugging at the purse strings and whispering softly in my ear "Pull the trigger Dec, you know you want to, go on just squeeze the trigger". It is then that I see my poor children and wife and think........ I wonder, how long could they do with out food and clothes.

With it being the two hundredth anniversary of Waterloo I have had a nosey at some recently released games on the subject. Waterloo 200 , pictured above is a block wargame by Italian company "Vento Nuovo games". It is a two or three player game, one controls the French Army and the other one/two control the Seventh Coalition. The rules are 6 pages long, 10 with the optional rules and it plays in 90-120 minutes.
﻿ 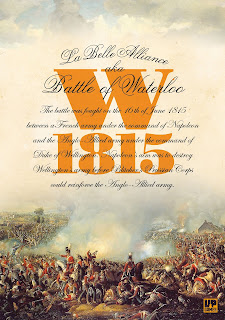 Another Waterloo game and one getting a lot of buzz at the minute is W1815 . W1815 could best be described as a wargamers filler, as it simulates the key events of the battle of Waterloo in 15\20 minutes. It was a kick starter by Finish company U&P games, which sold out rather quickly and a second printing will be available in September. 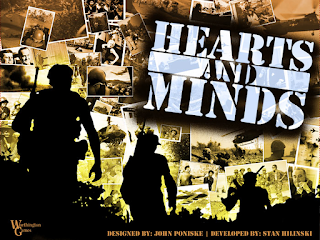 Hearts and Minds is an older card-driven game by Worthington games, covering the American build up of troops and arms in Southeast Asia. "Goooooood mooorning Vietnam", who can think of this topic without that quote coming to mind. It uses the CDG events, points system found in Twilight Struggle, a game I have enjoyed playing in the past. 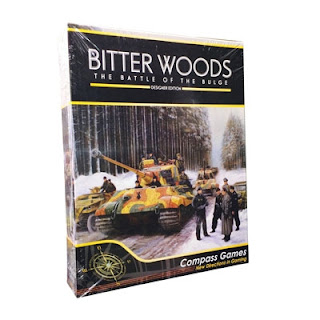 Old school hex and counter "Bitter Woods" has caught my eye also. Originally published in 1998 the latest version Bitter Woods Designer Edition﻿ looks wonderful and with larger counters my poor eyes will be relieved. It covers the "Battle of the Bulge" recreating the initial German success and allied counter attack. Plexi glass will be required as the map is paper in this version. 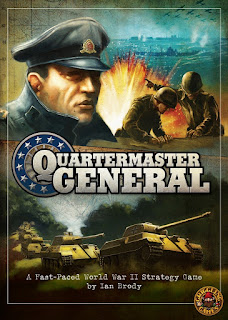 I have had a lot of fun recently playing the Spanish Civil War themed "Popular Front". As a result I have been looking out for a similar light, multiplayer wargame and spotted Quartermaster General. Quartermaster General is a two to six player, fast-paced (90 minutes), area control, card driven game that puts the players in command of the major powers during the Second World War. According to reviewers, while the game is simple to play it also has surprising depth. 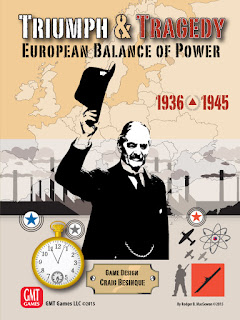 Finally, recently released Triumph and Tragedy by GMT games looks interesting and initial reports are very positive. Its a three player game, covering the competition for European supremacy during the period 1935-45. There are three ways to win: militarily, economically, and by developing the Atomic Bomb. The art work is striped back and a little uninspiring for my liking but with hidden movement, blocks and card play it tickles my fancy.

Dammit Declan! I need another Waterloo game like I need a hole in the head.

I am also intrigued by the Quartermaster game - I've always wanted to include logistics as a mini game in a wargames campaign.

"You know you want to Conrad" the little voice whispered.

Yep think W1815 is worth getting for a quick game while waiting on someone to come or if you finish a longer game early and have a half hour to spare.