"The Empire must fall. Our mission must succeed. We will find the traitor in our ranks. We will shatter the Imperial strength and liberate our people."
The Resistance 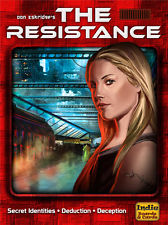 Following a couple of games of "Werewolf of Miller's Hollow", a similar game, at the monthly club night. I made the call on my birthday gift and decided on the second edition of the card game "The Resistance".  I went for the second edition having checked out the following Dice Tower Review by Tom Vasel :

and this thread on boardgame geek, comparing the two versions
ing/861183/so-youre-wondering-about-the-new-edition-of-the-re

So I am looking forward to a concentrated blast of deceit and paranoia, of trusting no one and having aaaaaalot of fun.
Posted by decb at 10/11/2012