BOARDED TO DEAD, NOT

Nine game's a gamed, eight gamers gaming and a partridge in a pear tree. Festive don't you think! 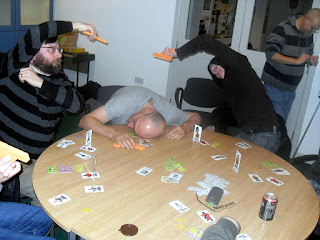 Gangstaa  Mr Pink aka DaveB lies in a pool of invisible blood with a bullet to the head while his fellow crew members squabble over the loot.

﻿Our first board game night was a great success and a regular meet up is now planned. The board game crew included DaveB, the Brimstone brothers Ross and Peter, Mike, Steve, its a family affair Glen and first born Glynn and me DecB.

What a great nights crack, eight gamers going at it for five hours.(doesn't quite sound right, maybe I should rephrase.)  The night got started with a quick 10/15 minute filler game of Hey that's my fish with DaveB, Mike and myself before all the guys arrived. Then we all got stuck in. 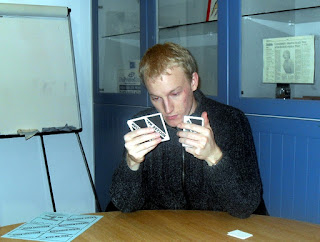 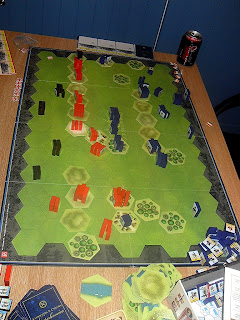 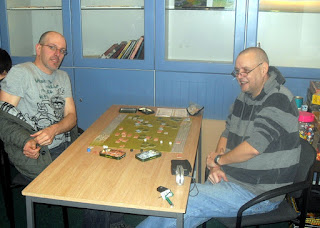 Glen and DaveB battled it out in the war game Hold the Line.

Mike, Ross, Peter and myself cracked open Dave B's brand new and sweet smelling Forbidden Island a fast play co op game often described as Pandemic lite. It went to the wire with the water lapping around our ankles as the copper arrived to fly us to safety, just in the nic of time. 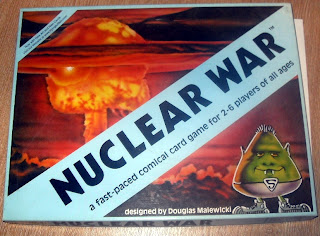 Next came an oldie but a goodie Nuclear War.

A Satirical game in which each player represents a "major world power" and attempts to gain global domination through the strategic use of propaganda or nuclear weapons. Peter came out on top in this game managing to stave off annihilation for man kind.

Finally we all came together for the last game, Asmodee's Cash & Guns. As the blurb describes, "In an abandoned warehouse a gangster crew is splitting its loot, but they can’t get an agreement on the split! It’s time to let the guns talk and soon everyone is aiming at everyone. The richest surviving gangster wins the game!" We played four games of this with the finally two games being the undercover cop variant in which one of the gang is a copper who has to phone the old bill before he is rumbled.

Top fun. I think the photos say everything. 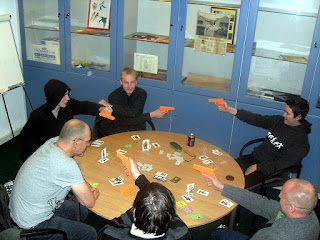 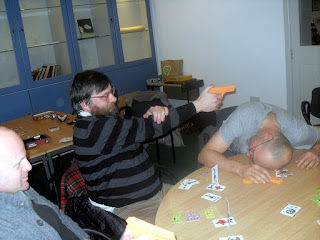 Mike steadies his arm for a cleaner shot. 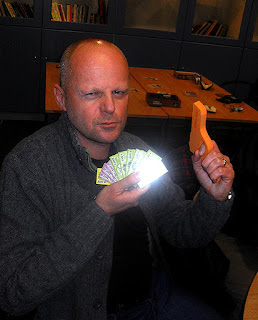 Mr Blue with his loot including the gold bar. 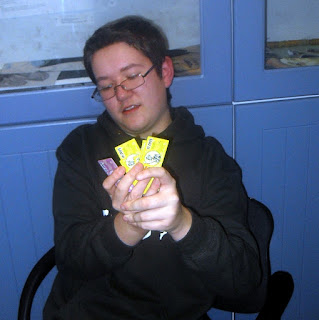 Looks like a good time was had by all.

I was wondering, what do you chaps make of Hold the Line?

Is it a poor man's Command & Colours or does it have attractions of its own?

Great report on a good nights gaming.
PS The wife is complaining that there's no "Going at it for five hours" around here!

Conrad can't give you an answer on Hold the Line yet as I have just played the one game. Hope to get a couple of games over the next month or so. Whats your view.

Reg I know it was for five hours but we did have little breaks in between.