It's been quite a while since I last posted on the blog, a case of blog fade - well almost. I have decided to create some fresh content as the tec savvy, digital age modern kids would say.  The game that sparked this mini resurgence, only time will tell whether its a last kick of the old goat or a phoenix like rebirth, is "A Victory Lost".

A description from "Board Game Geek" gives the background to the game.

"A Victory Lost" is a simulation of the intense mobile fighting between the Axis and Soviet forces in the southwestern USSR, from the completion of the Soviet encirclement in December 1942 to German Field Marshall von Manstein's famous "Backhand Blow" counterattack. The Soviet forces aims to trap and eliminate the Axis forces that are in full retreat from the Caucasus, while the Axis forces must successfully withdraw and attempt to restore the front line by launching a desperate counterattack. The slightest mistake might turn victory into a rout." 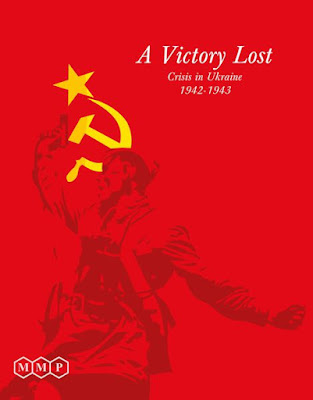 I acquired this game three years ago and even made an unboxing video for it, a video which the wife teases me mercilessly for, calling me a weirdo for making a video about the contents of  a box, the cheek!


Shortly afterwards I promptly sold the game as I couldn't see my fellow afflicted grognards buying into this traditional hex and counter wargame and become followers, in the way of the tweezer. Picking up the a fore mentioned  item in order to move the counters, as large fingers and thumbs make playing the game almost impossible. Mental note- purchase large medical tweezers on ebay. But I always had a yearning to return to this classic, a bugle call in the deep recess of my mind calling me to return to arms, you will tell me if I am been a tad over dramatic won't you.

So last week I repurchased AVL and retired to "Valhalla" the war room, to break it out. Two days later I resurfaced having read the rules and played a couple of solo game, it was wonderful. Well the game was wonderful, the wife's wrath less so! The chit pull mechanism which activates command HQ's was strangely addictive and created a real sense of tension in the game play. The timing of each chit pull and HQ activation can be vital, in either creating breakthrough's for the Russians or plugging gaps in the line if Axis. The rules are simple and elegant and come in at only sixteen pages. While the rules may be simple the tactics and strategy are compelling and engaging. I invited Al, my fellow warrior in crime, over and taught him the basics for a learning game. Thankfully he took to it like a panzer commander to a Tiger (a tank to the uninitiated) as I had hoped he would, despite my concern over the off putting small and fiddly counters.

I love when a game leaves behind memorable in game stories, like on this occasion when the German 4th Panzer Army managing to break out of what had became known as the "Kotelnikovo pocket" by securing a vital bridge over the Don as the red hordes were closing in for the kill. Or the Russian armored division holding a vital town and tying down much needed Axis troops and armor for a turn, which were desperately needed elsewhere on the front.

All in all a wonderful game which will see much table time in the weeks ahead. Much to Al's relief, as he is tiring of the seemly endless new games having to be learned in recent times. The curse of the shiny, as the Magpie would say or weirdo as the wife would say.

Email ThisBlogThis!Share to TwitterShare to FacebookShare to Pinterest
Labels: A Victory Lost, Board game